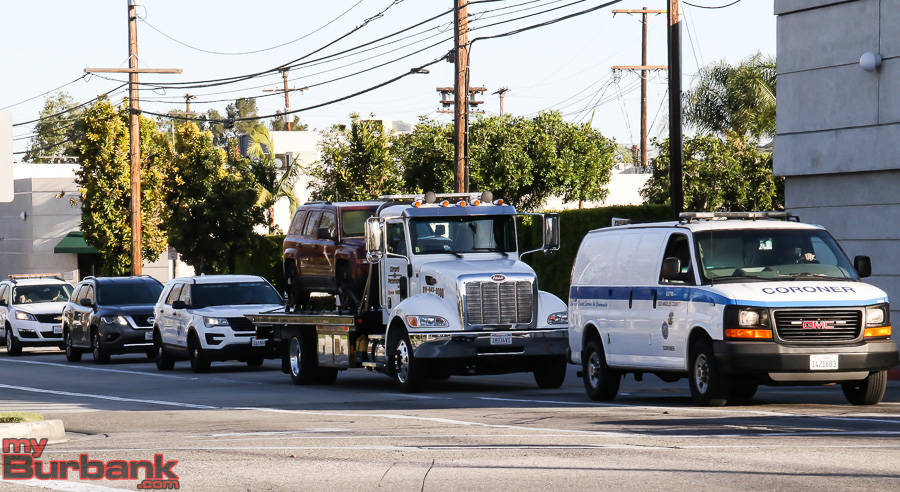 On Tuesday, April 17 at 7:10 a.m., a Burbank Police Parking Control officer was investigating a violation and discovered a dead body inside of a parked vehicle on the 1300 block of S. Varney St.

After paramedics arrived at the scene, a total of three bodies were found inside the car, all pronounced dead. The deceased are said to be adults, and one is a

“At this time, the investigation is being treated as a homicide. Detectives and Forensic Examiners are on-scene and are awaiting the arrival of the Los Angeles County Coroner/Medical Examiner,” said Sgt. Derek Green.

“The Burbank Police Department is aware of information circulating online regarding missing individuals from the Bakersfield area. At this time, identifications of the deceased have not been made.”

The parked vehicle is believed to be a red Jeep with Tennessee license plates. It is unclear how long the car had been parked where it was found.

Investigators have speculated that the victims were killed at a separate location and they might have been “dumped” on S. Varney St. If this is the case, the Burbank Police Department is likely to face a jurisdictional issue as agencies will become involved in the investigation.

Police are currently looking into surveillance cameras throughout the area for footage that might shed light on what happened.

UPDATE 4/19 1:14 p.m. – The three victims have been confirmed to be three caucasian men. The Los Angeles County Coroner’s Office has identified one of the victims as Jan Carlos Amiana.

UPDATE 4/19 6:00 p.m. – Burbank Police Investigators have started to work with the Riverside County Sheriff’s Department to follow up on information regarding a property on the 5200 block of Stone Ave., located in Riverside, CA. The location was secured by Riverside County Sheriff’s personnel pursuant for a search warrant and a search was carried out this morning. Early this afternoon, investigators determined there was evidence from the search that the three deceased men were victims of a crime. The Riverside County Central Homicide Unit is now leading the investigation.

UPDATE 4/23 – Both of the other victims have been identified by the Los Angeles County Coroner’s Office with the same cause of death. Lucas Josh Amiana, 23 of Bakersfield, was the brother of the first victim identified, Jan Carlos Amiana, 21 of Bakersfield. The brothers were reported missing last week while traveling to Riverside to visit a friend. The third victim is Carlos Lopez, 32. All three men died of gunshot wounds to the head on April 17, 2018.