Burbank won the title by defeating South Huntington Beach in the final 3-2.

“All of the players were collectively terrific in the 90 degree heat,” coach Elijah Wasson said. “They have been inching ever closer to this goal for years having notched previous wins against State Champions in various tournaments but never qualifying for Western State’s Championship play themselves. They increased their League, Playoffs, Tournament, and now Championship record to an impressive 20 Wins versus no losses or ties since this season began in August of 2015.” 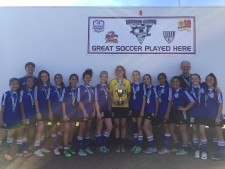 The team captured the first ever Western States Championship for Region 254. (photo courtesy of Kristi Chase)

In the final, both teams were tied 0-0 at halftime.

Trinity Vournas scored a pair of goals early in the third quarter, the second coming off of an assist by Madisen Chase.

Huntington Beach came back to score twice to tie the game, before, Ella Wasson scored with a minute left to play to pull out the victory.

The win was the second of the day for Burbank, which defeated Santa Monica, 1-0, in the semifinal.

Burbank earned the trip to Arizona after winning the Section 10 championship in Bakersfield back in November.