Two months ago she was honored at St. Finbar Catholic Church on her Diamond Jubilee — 60 years with the Missionary Sisters of the Sacred Heart of Jesus and was taken aback when she received the Key of the City from Mayor Bob Frutos. On Sunday, the congregation surprised her again with a Papal certificate from Pope Francis.

Father Francis Mendoza, the church pastor, read the words on the certificate and thanked Sister Regina for her continued service. 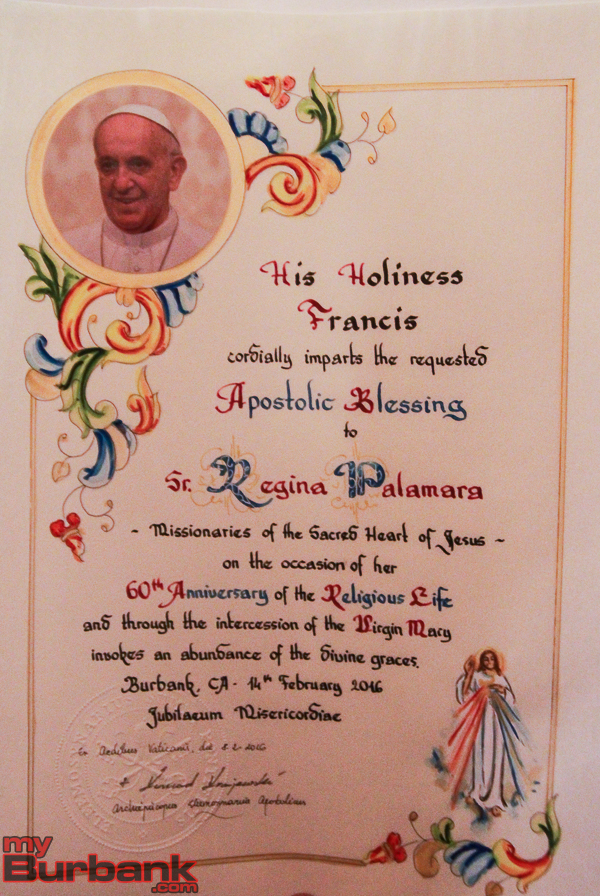 “You are a great inspiration and a source of light for us here at the church,” he said.

Former mayor Marsha Ramos was sitting next to the sister when the father announced her name.

“Her jaw dropped,” Ramos said. “Then she asks ‘did you know about this? Wow!”

“Thank you very much. It never ends.”

The certificate is a prayer and acknowledgement from the Pope, said Mayor Frutos.

“It’s the highest honor in the Catholic church for somebody who has spent 60 years of service to others,” he said. “It’s very touching. Again this is the unsung hero who lives in Burbank that does it for the compassion of humanity. That’s why I was honored to give her the Key to the City.”

Since 1956 Palamara has been a member of the Missionary Sisters of the Sacred Heart of Jesus, also known as the Cabrini Sisters, founded by St. Frances Xavier Cabrini, the first American citizen to be canonized by the Vatican as a saint.

Palamara continues to carry out the transforming spirit of Mother Cabrini by attending to the needs of the elderly and children in Burbank, especially at St. Finbar School.

Ana Batres has four children enrolled at the school and sees firsthand how Palamara interacts with the students.

“It’s an amazing surprise,” Batres said about the honor. “I’m very happy that she got the Papal certificate. She sets a great example with the way she lives her life.”

Palamara has created the Cabrini Companions, a group of lay people who connect with her in a special way, said Joanna Samija.

“So she has now started the Junior Cabrini Companions with the children and they are so inspired by her. So, I am grateful to Sister for how she inspires my children by her example and I know for me she makes me stronger in my faith because she shows she can be a real person who loves God and lives it every day.”

Palamara has been recognized for her dedication and commitment to youth, and for her missionary work and efforts in Africa, Ethiopia and the Philippines. She crochets and sells colorful scarves and donates proceeds to the Cabrini Missions in Ethiopia.

Locally, she is a supporter of Family Promise of the Verdugos, which works with homeless families to return to work and a home. She is also a member of he Knights of Columbus, the Cabrini Alumni Assn., the Cabrini Literary Guild and the Italian Catholic Federation.