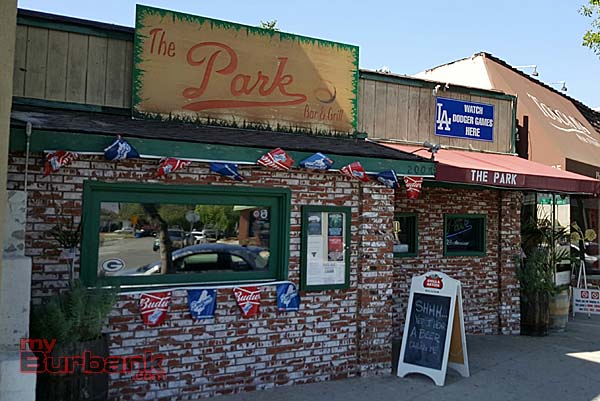 The Park Bar and Grill has been around for a while as a beer bar which also is known for sports viewing, everything from  Dodger games to MMA events. Stopping in for a Dodger game, I sat down to be able to watch the game and within seconds heard a Led Zeppelin song instead of the beautiful voice of Vin Scully.

The inside was nice and clean with a pool table in the rear. The seating was only bar table seating with no lower chairs or tables. The table we sat at only had one menu for the two of us to share.

I ordered The Park Burger, which is a 1/3 pound all Beef Angus patty with Bacon, Cheese, Tomato, Onion, Lettuce, Mayo, Pickles, & Avocado.As the waitress left the table, I asked for it to be medium rare – at least I tried.

When the burger came it looked as though it might be a winner, but further scrutiny was to reveal that looks might be great, but substance and taste is still king.  The bun was a brioche bun that was toasted and did hold up well the entire time.

I am not sure what cheese was used but it had little taste. The burger itself was cooked medium to medium well and did not have any juice at all or flavor. I think that the patty had been frozen at one time because it just did not do anything except sit there. The avocado was very small and the bacon was also scarce and did not taste real fresh. It also had the usual condiments such as tomato, pickles and lettuce.

Overall, it had all the making of possibly being a good burger, but the reality is it just did not match up to the quality of what makes a good burger. By the time I was done I did not feel that I had anything special and would not order it again if I ever came back to watch a Dodger game.

Remember, I said watch and not watch and listen. They do, however, have a nice deal on their hot dogs during Dodger games.

The Park Bar and Grill receives: Could Use a Rewrite