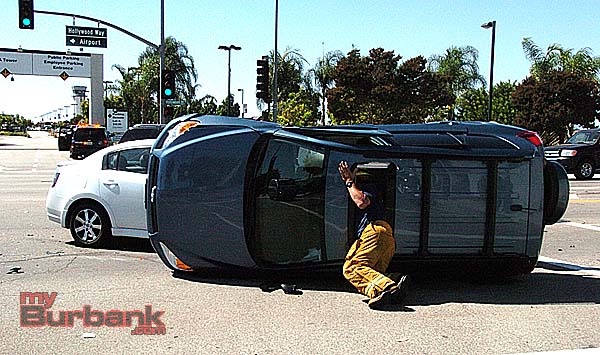 Just after 2:00 Monday afternoon, Burbank Police and Fire responded to a traffic collision with an overturned car at the intersection of Hollywood Way and Winona Ave.

Burbank Fire paramedics was first on scene to find a two vehicle accident with a vehicle on its side. Thankfully all occupants were able to exit their vehicles safely with only very minor injuries that did not require hospital transport.

The cause of the accident was unknown at the time but Burbank PD remained on scene for about an hour after the collision for further investigation.

Winona was closed eastbound and westbound from Hollywood Way to Ontario for the duration of the investigation, and one lane northbound on Hollywood Way was also shutdown which had traffic backed up to the entrance of the airport at Thornton.