At about 3:15 Wednesday afternoon, Burbank Fire and Paramedics along with Burbank Police responded to reports of a traffic collision with an overturned vehicle at the intersection of Victory Pl. and Maria St., near 24 Hour Fitness. 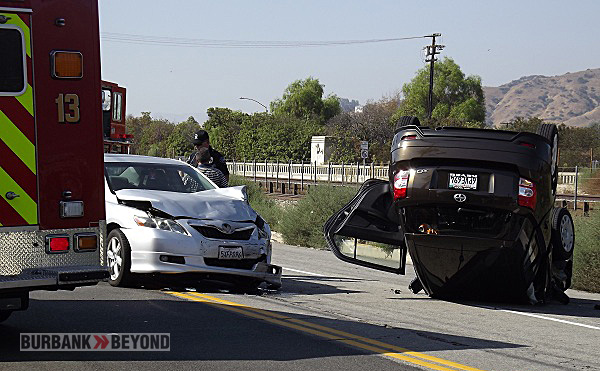 Both drivers walked away from this accident that left one vehicle on it’s roof. (Photo By Nick Colbert)

Truck 11 was first on scene and reported a two car accident with one vehicle on its roof. Witnesses to the crash reported that one car was attempting to turn left off of Maria St. on to Victory Pl., when it was struck by the other car heading southbound on Victory Pl.

Amazingly, both drivers walked away uninjured from the collision. Victory Pl. remained shutdown for about an hour in both directions so the tow company could remove  both vehicles from the roadway.

Engine 13 remained onscene for the duration of the tow operation as a precaution.  All other units were cancelled within minutes of arrival on scene.