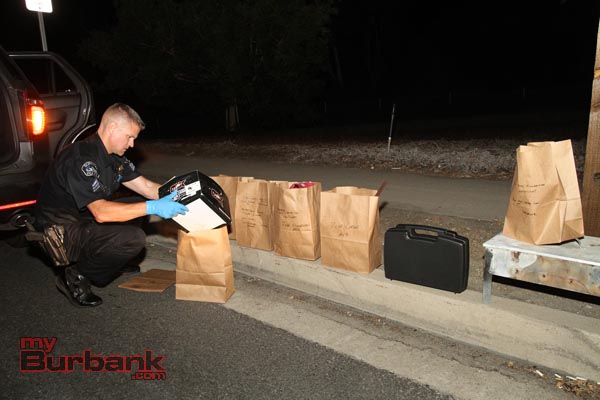 Burbank Police dispatch received a call from a citizen who reported she was witnessing two males burglarizing a couple of cars in the parking structure in the 100 block of East Orange Grove late Friday evening. She supplied the dispatchers a description of the suspects and the SUV they were about to leave in as well as the license plate on the vehicle.

Several Burbank Police units converged on the area within seconds, and one of the patrol officers saw the car matching her description leaving the structure westbound on Orange Grove Avenue heading toward the Northbound I-5 Freeway. While the officers waited until they had enough backup and a helicopter overhead, they initiated a felony traffic stop of the SUV on the Buena Vista off-ramp.

Once the suspects were taken into custody, a visual inspection of the Ford Explorer saw plenty of what appeared to be stolen property inside.

Glendale residents Arman Shakbazyan, 37, and Omanov Djasur, 29, were positively identified by the witness and booked for auto burglary. They are being held at Los Angeles County Jail with a $20,000 bail and will appear in Burbank Court on Tuesday, June 24, 2014.

Evidence from the rented Ford Explorer was booked and the vehicle was impounded as well.