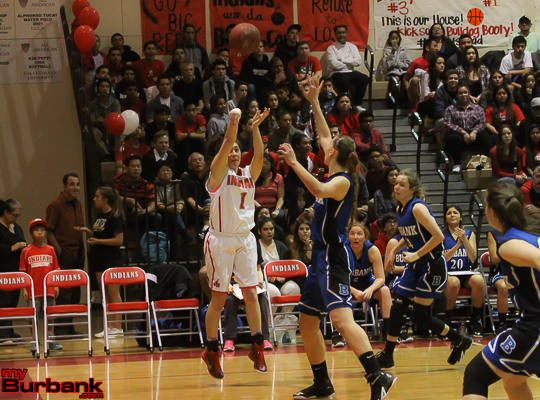 The Academy Awards and the Grammy Awards have come and gone. Much to our chagrin.

Last week the CIF Southern Section announced its All-CIF athletes for basketball and soccer. Without any further ado, it is our honor to present to you the All-CIF and Pacific All-League student-athlete awards for Burroughs and Burbank winter sports.

Earning All-CIF first team honors and being named the Most Valuable Player of the Pacific League is Burroughs senior, Davina Del Castillo. She averaged 11.9 points per game, 8.0 rebounds per game, 3.6 steals per game and 3.0 assists per game in league to cap off a stellar career. Del Castillo will take her talents to San Diego Christian in the fall of 2015.

“Davina showed that she was the MVP of the league by dominating all aspects of the game this year including scoring, rebounding, steals, assists, and making big time plays in pressure games and situations,” Burroughs coach Vicky Oganyan said. “She is one of the toughest players to have played at Burroughs both physically and mentally. She was a hard worker, a great leader, and a pleasure to coach. She will be greatly missed.”

Del Castillo’s teammate Sienna Brown had a strong season as well for the Indians who finished 30-3 and won a third consecutive Pacific League title with a 14-0 mark. Brown was named second team All-CIF and first team All-League after averaging 8.0 points and 8.2 rebounds in league play.

“Sienna emerged to be a huge offensive and defensive contributor for us. Her rebounding and ability to score calmly around the basket was a big part of our success,” Oganyan said. “Sienna was another solid senior who worked hard and was fully committed into making herself better in the offseason and making an impact on the court as a senior. She was a pleasure to coach and will be greatly missed.”

“Delaney led the team with her leadership, ability to handle pressure, get our team into our offensive sets, and getting the tough assignment of guarding the opposing team’s best guards. She was a hard-nosed competitor who did everything we asked of her and more for the good of the team,” said Oganyan. “She was an unselfish player who was willing to do anything asked of her to help our team win games. She was a coach’s point guard and a great leader. She will also be deeply missed.”

“Brooke did a little of everything for us including play outstanding defense. She is someone who goes 100 percent at all times whether it is practice or games. Her drive and energy is inspirational for teammates and coaches,” Oganyan said. “She is getting better every single day and expanding her game. The best part about it is that she is only a junior and will only get better.”

Oganyan had nothing but high praise for her team that broke a school-record for wins in a season (30), won 26 straight games, and cemented a legacy in Burroughs girls’ basketball lore.

“We had a special season breaking all type of school records and it is all due to the quality, effort, teamwork, commitment, and determination of this group of girls,” said Oganyan. “This team had an innate will to win, getting after all challenges and goals with their maximum effort and energy. I thank them for trusting us and running through a wall for our program and our school. They have been my inspiration and our memories from this year’s journey together will hold a special place in all of our hearts.”

Here are the All-League recipients for boys basketball, boys and girls soccer, and girls water polo: