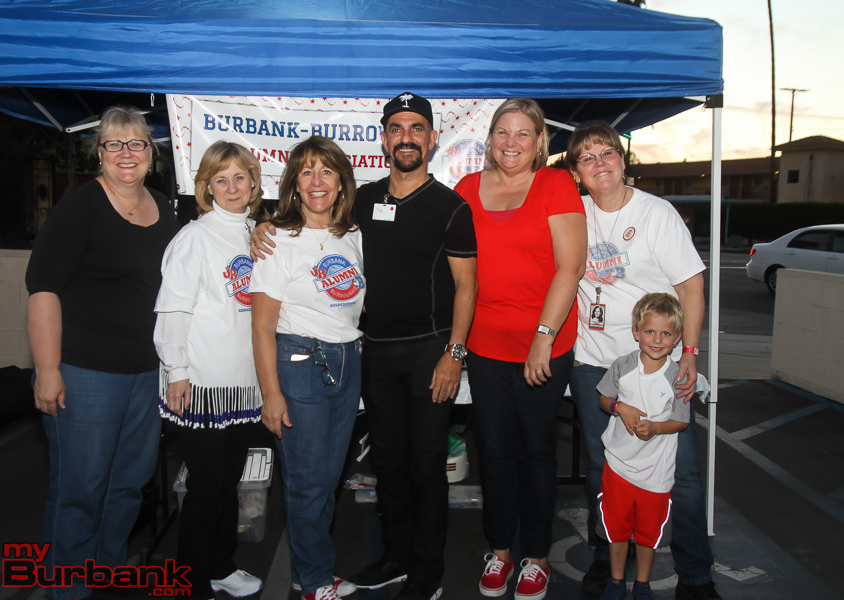 Yes the football game is the main event, but there’s a lot going on beyond the end lines at the Burbank Burroughs Homecoming Game.

Take the pre-game tail gate party, a fundraiser for scholarships coordinated by the Burbank-Burroughs Alumni Assn. and held in the Burbank Unified School District parking lot. District liaison Emilio Urioste and alumni association President Joanne Lento Miller were scurrying about getting ready for more than 50 alumni to arrive.

Kuzma recalled that his favorite teacher was Dave Olson and his favorite memory was marching with the band from Burbank High School to Burroughs before the cross-town rival game.

MacLaren, JBHS 1971, marched with the Burroughs drill team in 11th grade. Her favorite class was drama and her favorite teacher was drama teacher Ernst Korngold. After graduation, she continued in the entertainment field. She was a theatrical producer of touring musicals and started The Actor’s Company at the Burbank Little Theater in Izay Park.

Tony Delgado of Fiesta Tacos had set up the grill and spicy condiments for one’s choice of spicy or mild carnitas, beef or chicken tacos, rice and beans.

One of the first guests to arrive was Burbank Mayor Jess Talamantes, who graduated from Burroughs.

Ludonna Loney, BHS 1978, and her husband, Ed Loney, were sitting with their son, Ryan Loney, BHS 2018 who is on the swim team. Across the table were Linda Toscano Fountain, BHS 1978, and Jeff Fountain. Ludonna and Linda met at Luther Middle School.

Asked what was his favorite memory of past cross-town rival games, John had one word that said it all.

“Watching my husband win all those games!” she said. About the tail gate party, she added, “This event is just great! It’s a friendly rivalry but a great sense of community.”

The group headed over to Memorial Field to sit in the alumni section on the 20-yard line. Burroughs was the home team.

Getting ready to call the game, Kyle Fitzgerald hovered over the microphone in the press box. He accepted a brief announcement from an alumni volunteer about the group attending the game and promised to read it. He is a second-generation Burroughs alum, having graduated in 2001. His parents graduated from Burroughs as did his siblings.

At the Burroughs concession table were the Candy Ladies — PTA past president Doris Palmer and PTA President Ruth Frechman. Palmer has volunteered at the concession stand for 15 years while Frechman’s record stands at 19 years. That’s a lot of chocolate!

The big surprise of the evening was during halftime when Mayor Talamantes presented Jeff Tully with a commendation, honoring him for his 25-plus years as a sports writer for the Burbank Leader. Tully said he was totally surprised by the honor. Although he didn’t go to either high schools, he said he feels very much at home covering the games and especially looks forward to the Burbank Burroughs football game each year.

The result was that the Burbank Burroughs Alumni Band, of which Kuzma is in charge, was invited to be guest performers at a future Burbank High band concert and graduating seniors of both schools were invited to join the alumni band in Burbank On Parade.

These are just a few of the things that go on behind the scenes at the annual Homecoming Game.