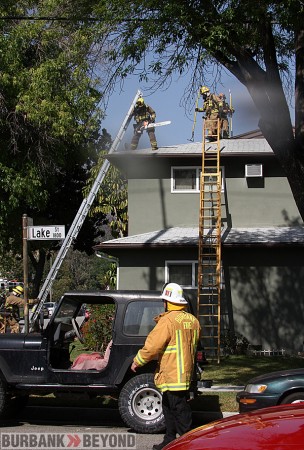 Burbank and Glendale firefighters work together to ventilate the roof of anapartment building fire Tuesday afternoon. (Photo by Ross A. Benson)

Burbank and  Glendale firefighters were called to this apartment house fire in the 500 Block of Irving Ave. in Glendale at 3:06 p.m. Tuesday afternoon.  First reports were that people were possibly trapped inside the second floor apartment, but after two searches, no victims were found. The fire was held to the one unit in a two story building.

The fire was just two blocks bey0nd the Burbank City Limits, at the corner of Lake St. and Irving Ave. The Glendale Fire Department was assisted by three Burbank fire engine and one truck company in knocking down the blaze quickly, as the two departments acted as one.

Although the fire was in Glendale, it was the foresight of the cities that set up Verdugo Fire Dispatch, to send the nearest fire engines and provide assistance regardless of which city the fire might be in.  Just a few hours earlier Tuesday both the Burbank and Glendale Fire Departments worked together with other departments on a drill at the Bob Hope Airport.

A Burbank fire investigator was called to the scene to determine the cause of the fire.  No residents or firefighters were injured. 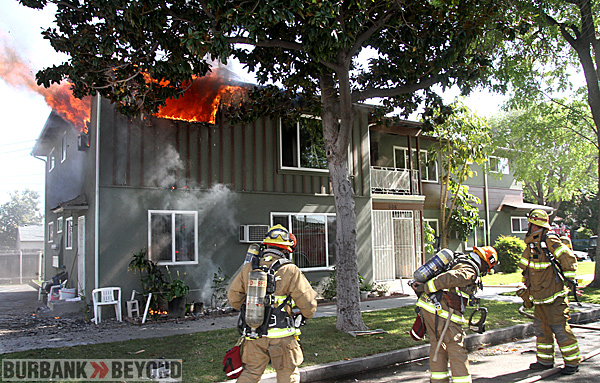 Moments after arriving on the scene, firefighters from Burbank and Glendale prepare to battle a two-story apartment house fire Tuesday afternoon in the 500 Block of Irving Ave. in Glendale. (Photo by Ross A. Benson)