What might have looked like a movie scene on Lake Street near Orange Grove Wednesday afternoon was actually an attempted robbery and carjacking.

The victim, who is a Burbank business person, was driving a deposit to a local bank and was forced to stop after two suspects attempted to rob her, forcing her car up over a curb. After the unsuccessful robbery attempt, they then carjacked another car and attempted to make their getaway.

While Burbank Police were responding, their dispatcher was notified that one of the cars involved was being followed by a surveillance unit of the Los Angeles Police Department’s Commercial Crimes Unit. LAPD then directed Burbank marked patrol cars to Chestnut, west of Keystone, where a felony stop was initiated and one suspect taken into custody.

Shortly later, three more suspects were detained on Burbank Blvd. at Lincoln Street and later arrested after a witness allegedly identified them as being a part of the crime.

All of the suspects were transported back into Los Angeles jurisdiction by Burbank patrol units were they will be held.

According to LAPD Media Relations, the case is ongoing and will be investigated by their Commercial Crimes Unit and Burbank Detectives.

The name of the Burbank business was not released by police officials. 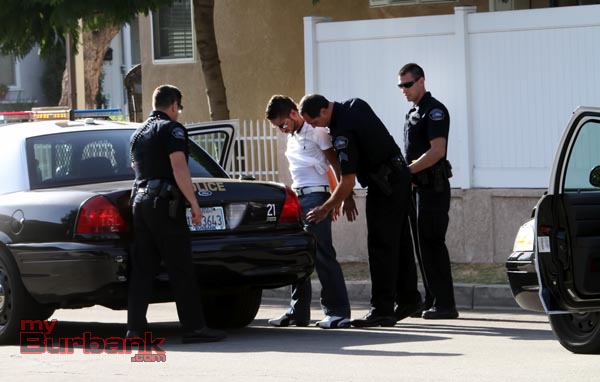