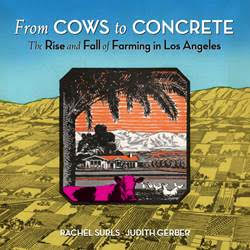 The co-authors of From Cows to Concrete: The Rise and Fall of Farming in Los Angeles, Rachel Surls and Judith Gerber, present an illustrated tour of Burbank farming and Southern California’s forgotten history as an agriculture center at the Buena Vista Library on Wednesday, May 3.

“Long before Los Angeles County was the nation’s largest urban center, it was the country’s agricultural heartland, producing an abundance of grain, fruit, vegetables, milk and much more,” explained Surls. “With a special focus on Burbank and surrounding areas, we’ll trace this history from pre-colonial times to the present, including how post WWII development paved over the area’s farm bounty.”

“We’ll show some amazing images from Burbank’s past that will spark discussion about how the current passion for gardening, farmers markets and local food not only ties in with local history, but may also inform the future,” she added.

“Human population has grown from 2 billion to 7.5 billion in the past 100 years and we have an enormous appetite,” commented Kreigh Hampel, Recycling Coordinator for the City of Burbank’s Public Works Department. “By understanding the history of food, water and development, we can better understand the world’s need for secure local food systems.”

The library became interested in hosting Surls and Gerber’s presentation on Burbank farming and Southland agricultural history after Amy Hammes from the Burbank Recycle Center showed the film Just Eat It in 2016, explained Librarian Hubert Kozak.

Just Eat It is a documentary about the waste in the food production system from farm to retail to individual households.

“We were surprised by the large audience for this event,” added Kozak. “They asked a lot of questions. It became apparent that this issue resonates not only with consumers and food lovers but also with an entire local network in the community of people concerned about environmental issues and sustainable urban living, including those who are a part of the current urban farming movement.”

From Cows to Concrete makes some of these same connections as it reviews the history of farming in Los Angeles.

“Like all history, it shows us that we have options,” Kozak said. “And among the history programs we do at the library, the ones we like best are those that tell a local story that connects older and younger generations living in this community.”

“Many of us remember growing up in Los Angeles and living in areas that were still in transition from farmlands to suburbia, areas still dotted with open fields and orchards,” he added. “Younger people growing up in this area today just have no idea that the area they lived in was ever anything else, or that life could be lived any other way, and it is important to the decisions they make about their future to know this is not so.”

The illustrated tour of From Cows to Concrete begins at 7:00 p.m. and is free to the public.