With the exception of two turnovers, the Burbank High football team played near flawlessly against Canyon in the final nonleague game on Thursday night at Memorial Field.

During the past week, the Bulldogs received some bad news when it was learned their season-opening 18-point upset win over Monrovia was forfeited after using an ineligible player, senior wide receiver Max Weisman, who will be sidelined until October, so the 35-6 rout of the Cowboys was welcomed with both arms.

“We worked two weeks exclusively for this team,” Burbank coach Richard Broussard said. “We’re getting there, but we need to get better. People are coming for us.” 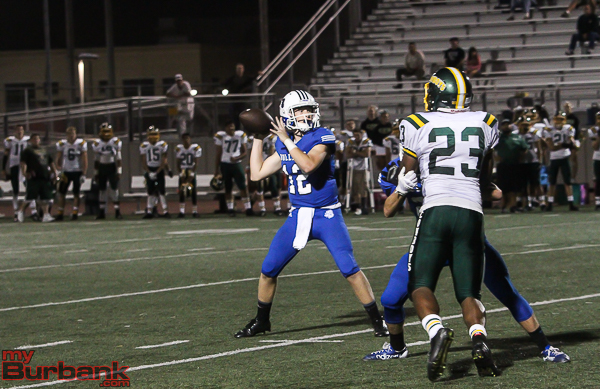 Quarterback Guy Gibbs readies to unload against Canyon. (Photo by © Ross A. Benson)

Burbank’s ground game was clicking full bore as it collected 183 yards, and the hard-hitting and stingy defense held the Cowboys to 53 yards rushing.

“After watching all that film and the bye week, I’m feeling more comfortable,” said Gibbs, who passed for 132 yards and hit nine of 14 with one interception. “It’s slowed down a lot for me.”

Now begins the hard work for the Bulldogs, who will pursue the Pacific League title and a chance to advance deep into the CIF Southern Section playoffs.

The Cowboys scored first when junior quarterback Miles Fallin (22 of 43 for 206 yards and three picks) found junior wide receiver Jake Gavin (26 yards on three catches) with a three-yard toss in the right corner of the end zone and 6:37 left in the opening quarter for a 6-0 lead. 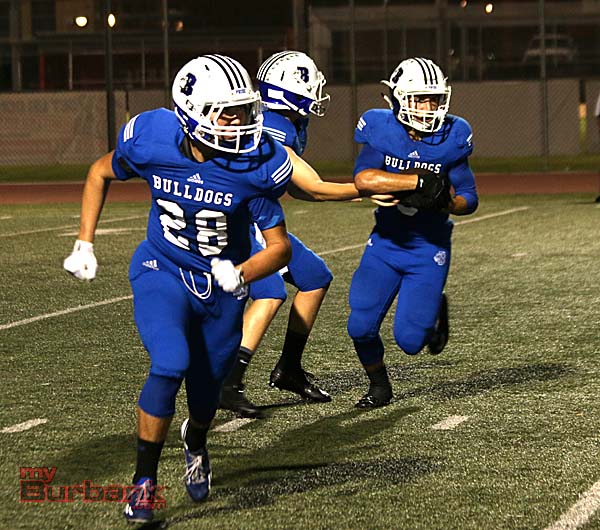 Tailback Darnell Williams is off to the races. (Photo by Edward Tovmassian)

From there, it was like a steam-roller hit Canyon (1-3) as the Bulldogs led 14-6 at the intermission, and then tallied three touchdowns in the second half.

Burbank used an 83-yard drive to make it 7-6 when junior running back Nick Warren (49 yards on eight rushes) located the end zone with a three-yard blast and 10.5 seconds left in the initial quarter.

The Bulldogs then forged a 14-6 lead and 1:01 left in the second quarter when Gibbs hit senior wide receiver Noah Powell, who made an incredible catch of a 34-yard strike that capped a 90-yard march.

It became 21-6 after junior defensive back Andy Reyes scooped up a botched snap on a punt and raced 50 yards for a touchdown as just under seven minutes remained in the third quarter. 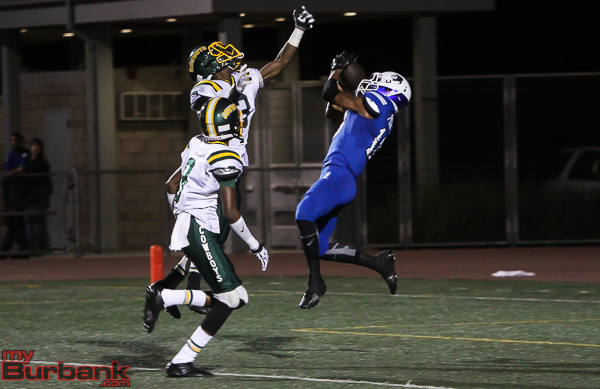 Noah Powell made an incredible catch. (Photo by © Ross A. Benson)

When senior defensive back Aki Arlington blocked a punt it set up a three-yard dash from sophomore running back Blake Quinteros and 3:07 left in the third quarter for a 28-6 advantage.

Quinteros (68 yards on 10 carries) added his second touchdown when he scooted in from four yards out and 3:11 showing in the final quarter that made it a 29-point bulge.

Junior defensive back Forest Fajardo had two of the three interceptions and added 43 yards on three receptions.

“We wanted to focus and have fun,” he said. “We didn’t want that [Canyon’s only score] to happen again. We played together.”