Four games remain in the Pacific League race and the action begins tonight at Moyse Field as Burbank High meets Hoover, while Burroughs plays at Arcadia on Friday in a battle for first place.

The Bulldogs (3-3 and 2-1 in league) are coming off a 61-7 rout of visiting Glendale and hope to add the Tornadoes to the list of victims.

Hoover has one victory on its resume versus Sotomayor, 41-18, but have dropped four straight including three league matches. In those games, the Tornadoes have scored six points and fallen, 37-0 at Pasadena, 48-6 at Burroughs and 49-0 versus Crescenta Valley.

Hoover prefers to run the football with sophomore running back Maurice Herrera accounting for 296 yards and one score. Senior fullback Calvin Lopez has 204 yards with two touchdowns, and junior quarterback Quinton Smith has 186 yards and one touchdown. Smith has 54 yards through the air.

This game could get ugly real fast and sophomore running back Darnell Williams will lead the charge after rushing for 403 yards with three touchdowns.

Sophomore running back Blake Quinteros has 242 yards with a pair of scores, and junior running back Nick Warren has 176 yards and two touchdowns.

Burbank’s passing attack is spearheaded by junior quarterback Guy Gibbs, who has thrown for 585 yards with eight scoring passes and three interceptions. 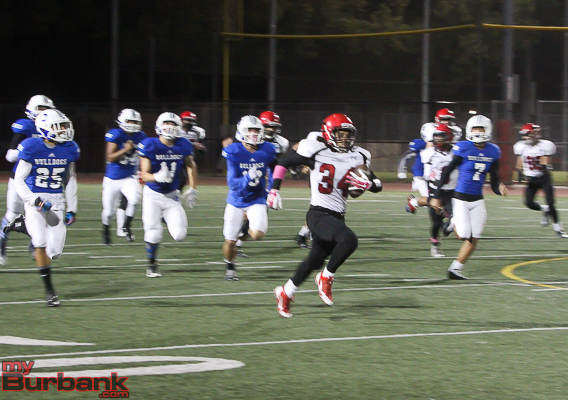 Burbank’s defensive charge will be on display tonight against Hoover. (Photo by © Ross A. Benson)

The Indians (5-1 and 3-0 in league) own a five-game winning streak and have scored 40 points or more in those games. The Indians’ defense is stout and could wreak havoc against the Apaches.

Senior quarterback Steven Hubbell will need to be sharp and has thrown for 801 yards with 15 scores and two interceptions. Hubbell has four rushing scores. 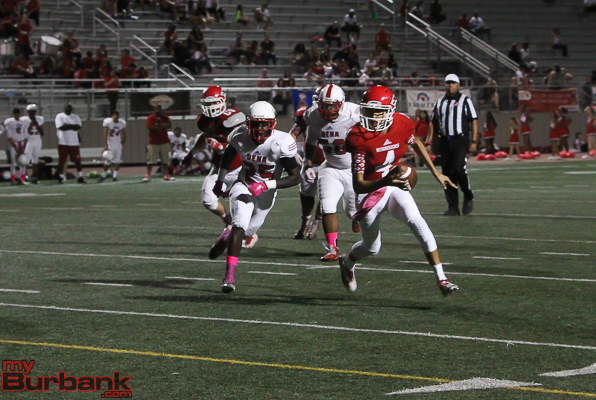 Burroughs quarterback Steven Hubbell will be counted on versus Arcadia. (Photo by © Ross A. Benson)

Senior quarterback Nico Hillier has passed for 1,009 yards and has nine touchdowns with three picks. Hillier has 309 yards with five scores on the ground.