If there is one good thing that both Burbank and Burroughs highs have going well in track and field, it is that they are able to replace top athletes.
Burbank won the Pacific League boys’ dual meet title last year, its first in 31 years. The Bulldogs lost several key competitiors from that squad, but should be strong again this season.
Burroughs has a very strong group of juniors and could make a run at a CIF title a year from now.
Both schools also have solid girls’ teams and should be near the top of the Pacific League.

Burroughs
The Indians have a very strong and deep group of distance runners, many of which are just juniors. The group that includes Alex Hirsch, Jagdeep Chahal, Jacob Calderon as well as seniors Timothy Wells and Daniel Fendrich is certainly one of the strongest in the state. Four of the five went under 4:30 in the 1,600 a year ago.

Junior Christian Valles is working on being one of the best pole vaulters in the state. The defending Pacific League champion has already cleared 14 feet, 6 inches early in the season. Coach John Peebles said Valles made a big change since last season in that he went from being a left-handed vaulter to a right-handed one.
Daniel Han, who finished third in league in the pole vault a year ago, is also back.
Sammy Duran gives Burroughs a sprinter as he qualified for CIF last year in the 400 and in the 4 x 400 relay. He also could be a key on some distance medley relay teams as Burroughs is certainly capable of producing marks that rank amongst the best in the nation in the event.
Max Carrillo was third at the Pacific League finals in the 300 hurdles a year and should also have a big year.
Mike Dermendjian should give Burroughs a solid competitor in the discus.
Burroughs’ girls team is led by junior distance runner Emily Virtue, who is one of the best in the state when healthy.
Senior Nadime Younan is the school record holder and returning Pacific League champion in the discus. She is also expected to have a big year.
Sophomore Jada Reese is expected to give Burroughs a strong presence in the 100 and 200 meters. Junior Kate Jones will provide help in the 400, as will senior Izzy Funes , who also gives the team a solid presence in the horizontal jumping events.
Senior Heidi Eligio is another solid distance runner who has already produced fine early season marks.
The Indians will benefit in April when transfer Alex Akopian becomes eligible. She could be an elite pole vaulter.

Burbank
The Bulldogs are certainly stronger with their girls’ team, led by seniors Kira Bochard and Haleigh Cusumano, who are very versatile and can score in a number of events.
Bochard is particularly strong in the 300 hurdles and holds the school record at 45.72. She is also solid in the 400. Cusumano has the school record in the 400, but is also working at becoming a strong hurdler and long jumper. 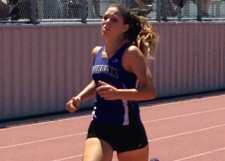 Chloe Tilton, who did not compete last season but is very talented according to coach Darin Wolf, is another who could make an impact in the 400.
Distance runner Gabby Collins might join the others in attempting to create a superb 4 x 400 relay.
Pole vaulter Michaela Teixeira could be a strong candidate to win the league title.
Burbank’s boys’ team is led by Arcadia transfer Vedavit Shetty, who has already gone over 45 feet in the triple jump and 20 feet in the long jump. He will also play a role in Burbank’s relays.
Joey Miller is one of the top sprinters in the league, and will be helped in the relays by Odele Hospidales, who was the frosh-soph league champion in the 100 a year ago.
“After winning the title in 2016, these boys now know what it takes to win, so we will see if they are willing to put in enough work,” Wolf said.
Burbank expects to get help in the hurdles from Sergio Aguilar.
Elijah Parrott and Angel Flores are two experienced distance runners that can score points.
Alan Hovanesian is solid in the shot put and discus and Zion Chavez should help in the jumping events.