About 100 Boy Scouts, past and present, parents, siblings and friends gathered on Sunday at the Magnolia Park United Methodist Church for the first alumni event, which was organized by Giselle Vivado and Joylyn Spencer. 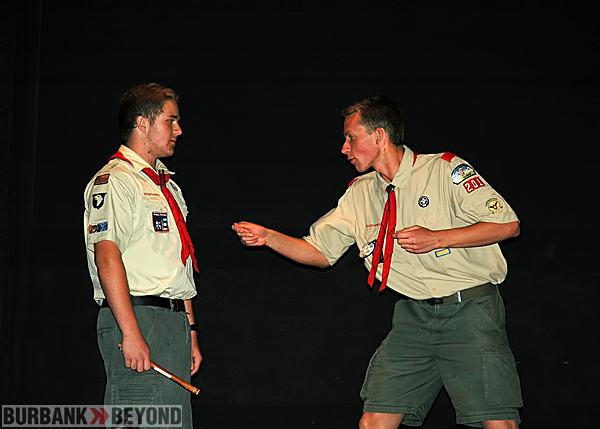 Boy Scouts involved in a skit were Ethan Durkee and Nick Rogus. (Photo by Joyce Rudolph)

“The parents never get to see the skits, so this is a treat for them,” said Nancy Durkee, Scoutmaster of Troop 201. “Some of the skits they pick up from camp. Others they make up on their own.”

Today the troop boasts 31 members. It is more than 60 years old and the oldest troop in the Iron Eyes Cody District, Durkee said.

The reunion was a way to show the boys that they are carrying on a great tradition, she added. And it lets former scouts know, today’s members are still having a great time.

The event’s other purpose was to raise funds to help more boys go to camp this summer, said co-chair Vivado.

The scouts have chosen to go to Emerald Bay, the Boy Scouts of America camp on the back side of Catalina Island. There boys have fun while earning merit badges in water sports and other activities. Five days at camp costs $600 per boy, she said.

“We are hoping to have raised $2,000 tonight,” Vivado said. “The effort represents hundreds of hours by our parents and wonderful donations from local merchants.” 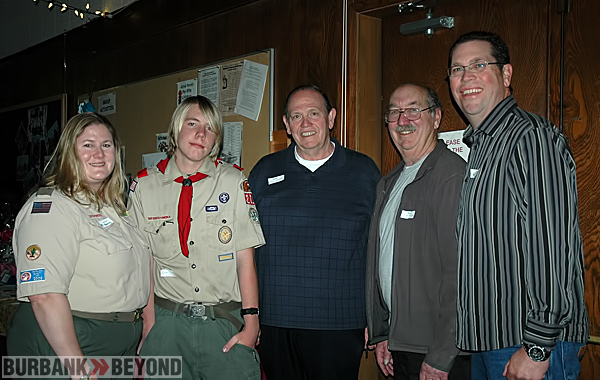 The troop, which is sponsored by Magnolia Park United Methodist Church, is also raising funds with the community discount card. It costs $10 and offers discounts at Flappers Comedy Club, Racer’s Edge and others. To get one, email troop201fundraising @gmail.com.

Former assistant scoutmaster Don Peterson, who is the liaison between the church and troop, remembered a rafting trip he and wife Debbie went on when their son David was in the troop 30 years ago.

On the way to Snake River in Idaho, they stopped at Circus Circus in Las Vegas where the boys won several stuffed animals in the arcade. Since there was no place to store the prizes, they ended up on a raft going down the river along with the boys, Peterson said.