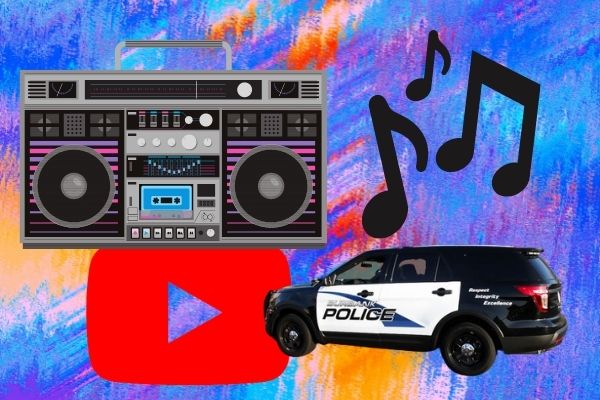 Police seem to be rocking out across the country to music while performing their duties. No, it is not that they need the entertainment but the newest way to thwart citizens from recording their actions and then posting what they see on YouTube.

When you post a video to YouTube, it is immediately checked for copyrighted music infringements. If it is detected, the audio is sometimes removed from the video. While of course the music is removed, so also is any dialog that is also recorded.

In a recent incident reported by The Guardian, police in Santa Ana earlier this month woke up nearby residents as they played Disney songs such as Toy Story’s You Got a Friend in Me, Encanto’s We Don’t Talk About Bruno, Mulan’s Reflection and Coco’s Un Poco Loco over one of the police vehicle’s loudspeaker as they investigated a stolen vehicle.

A video they referenced, showed a Santa Ana Councilmember questioning police as to why they were playing the music and the officer said it was basically because of people recording them.

Similar incidents have also happened in Beverly Hills and Oakland recently. Members of the public often try to egg on officers to get a reaction while recording them, citing their first amendment rights. While most times this is just unwarranted to try for reactions, sometimes the recording of officers while performing their duties has resulted in bringing some disturbing actions to light as seen throughout the country in recent years.

Although there have been no incidents in Burbank of officers blaring music, Sgt. Brent Fekety of the Burbank Police Department said when asked if the department had knowledge of this new trend, “The Burbank Police Department is aware of incidents in other areas where officers have reportedly played loud music during interactions with the public while being recorded. To my knowledge, and in speaking with the Commanding Officer of the Patrol Division, we have not had any incidents involving that type of activity.

Further, the command group of each patrol shift has spoken with their assigned officers regarding this type of activity and the officers have been instructed not to engage in this type of conduct.”

Fekety went on to point out that the department has been and continues to be transparent when it comes to the use of officers’ Body Worn or In-Car Cameras.

“The Burbank Police Department has a policy in place, Policy 453 – Use of Body Worn and In-Car Cameras, wherein all uniformed and investigative members of the Department are issued a body worn camera (BWC) and shall record all incidents, including enforcement and investigative contacts. Further, the recording shall continue until the investigative or enforcement contact has ended. These recordings are then downloaded to our designated Department digital audio/video management systems. If the public so chooses, they may request specific recordings in accordance with the Public Records Act request, which is handled by our Records Bureau. These BWC recordings help with transparency and accountability, as well as providing evidentiary value, assisting with personnel complaints, protecting officers from false complaints, and ensuring officers are respecting the people they come in contact with.

We reached out to the Recording Industry Association of America for comment and also asked if police officers that were playing the music as part of a tool instead of for personal enjoyment were also a possible copyright violation but they did not respond.