Burbank and John Burroughs High Schools have joined forces off the football field and announced the First Annual Homecoming Food Drive to benefit the Burbank Temporary Aid Center (BTAC.) At the Homecoming games to be held on Thursday, November 7, and on Friday, November 8, the schools are asking that each person attending a homecoming game bring 2-4 non-perishable food or hygiene items to help fill BTAC’s shelves with food and supplies for those needing assistance in the community of Burbank. 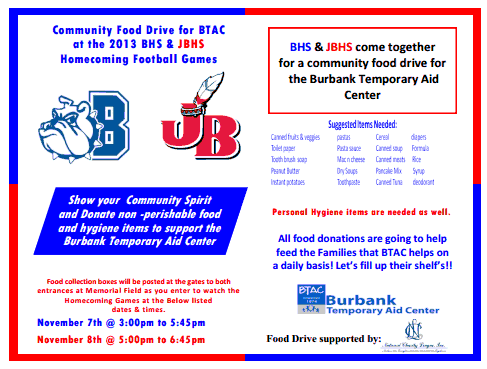 Items like a can of soup, box of pasta or cereal, a bar of soap, shampoo, toothpaste and toothbrushes are welcomed. Baby formula and diapers are always appreciated.

Volunteers from the local Burbank chapter of the National Charity League (NCL) will be at both Home and Visitor side gates accepting donations.

Those interested in learning more about the National Charity League and the Burbank chapter should check out their website. Membership applications for NCL’s 2014-2015 Membership Year, which starts in September 2014, are currently being accepted. The Burbank chapter of the NCL was organized in 1959, chartered in 1960 and is organized by grade level from 7th grade to 12th grade. Burbank NCL organizes charitable activities by mother-daughter teams and fosters those relationships with social, cultural, leadership and philanthropic training.

The school that brings in the most supplies for BTAC will receive an anonymous monetary donation to be used towards a philanthrophy of that school’s choosing.