Burbank High and Burroughs will have home dates beginning tonight at Memorial Field as the Bulldogs face Glendale, while the Indians play Friday against Pasadena and seek their fifth straight win and third consecutive in Pacific League action.

After a win against Monrovia that was stricken via forfeit, Burbank split the next four games, but its 21-20 league defeat at home against previously winless Muir last week really stung, which could make it a long night for the Nitros.

The Nitros are 1-4 after four consecutive defeats including league losses versus Arcadia, 42-0 at home and on the road against Crescenta Valley, 59-7.

Glendale opened its season with a 27-17 triumph at San Gabriel, but then suffered home setbacks to La Canada, 22-9 and South Pasadena, 51-21.

Burbank junior quarterback Guy Gibbs has thrown eight touchdowns with three interceptions and has 555 yards. Gibbs sets the tone for the offense which has scored a combined 27 points in its last two games.

The running attack is solid with sophomore tailback Darnell Williams accounting for 300 yards, with a long of 43 yards and one score. Williams has also snared seven passes for 57 yards. 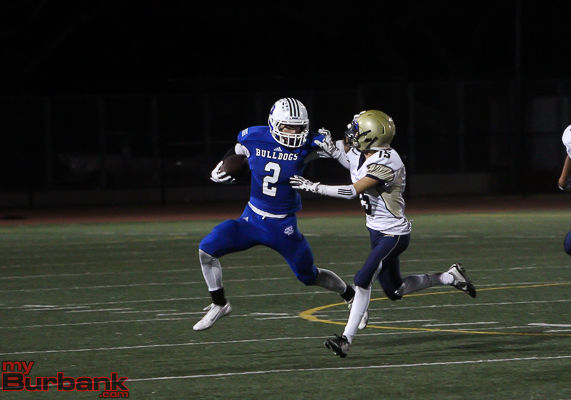 Junior running back Nick Warren has 176 yards with two scores and junior Andy Reyes has rushed for 100 yards.

Junior defensive back Miguel Vasquez has 24 solo tackles and 13 assists, and junior linebacker Jake Kelley has contributed 24 solo tackles with 12 assists and a pair of sacks.

The Indians have scored 42 points or more in four consecutive games, including a high of 49 on the road against Rosemead and at home versus Muir.

Senior quarterback Steven Hubbell has 718 yards through the air with 13 touchdowns and two interceptions. Hubbell has also run for a pair of scores.

Senior defensive back Jarret Wrobel has 12 solo tackles and 11 assists with three interceptions, and senior linebacker Connor Garden has five solo tackles with 18 assists and one sack.