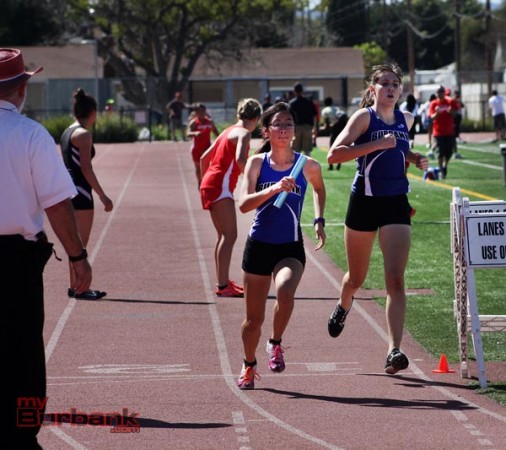 Burbank and Burroughs held their annual Burbank Relays on Saturday (Photo by Ross A. Benson)

Nothing is ever guaranteed, but what could be a promising track and field season for Burbank High and Burroughs got underway this past Saturday morning at Memorial Field when the Bulldogs and Indians competed in the Burbank Relays.

The Burbank boys’ team is coming off a second place finish in the Pacific League, and has a nice blend of elder statesman and youth. 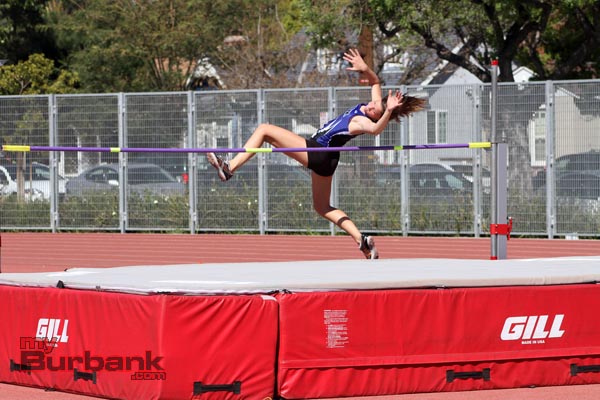 Burbank looks to soar to new heights this season (Photo by Ross A. Benson)

“I’m really excited for this upcoming season,” Burbank coach Darin Wolf said. “We have a really good mix of seniors that have the experience of being with the program for three seasons now, along with a group of underclassmen with the raw talent that can have an immediate impact.”

The Bulldogs are especially strong in the field events and will be led by CIF Southern Section finalists Andy Hurtado in the discus, and Chris Miranda in the pole vault.

The talented seniors with high aspirations seek to establish school records in their respective events.

Senior Andres Pulgarin is a pole vaulter, while senior Josh Lee, along with senior Eddie Gibbons will participate in the throws.

Senior Trevor Strang, senior Chris Walker and junior James Williams will compete in the jumps. Williams will also try and pick up points in the sprints and relays.

Senior Jonathan Afzali will run in the relays and hurdles, while sophomore sprinter Josh Cantong, who suffered a horrific injury during a football passing league game, had the second fastest time in the state.

The Burbank girls’ also did well, placing third in league and likewise hope to better that mark this season. 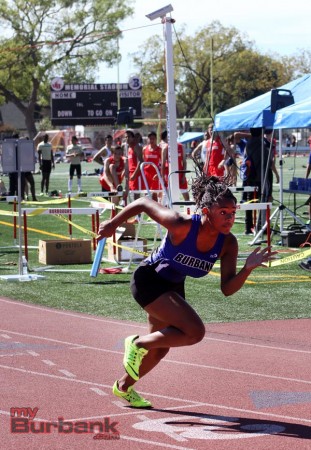 Burbank Track and Field (Photo by Ross A. Benson)

Spearheading the distance runners will be sophomore Candela Fernandez, while senior Arlette Movsesyan and senior Daisy Ignacio will add insurance.

Junior McKynlee Vuncannon and sophomore Kelsey McCord will participate in the throws, while senior Elizabeth Sanchez and senior Lilit Vardanyan hope to score points in the jumps.

In order for the Burroughs boys’ to be contenders for the league title, the field portion will have to deliver in a significant way.

“We definitely have some talented kids,” Burroughs coach John Peebles said, “so we are just focusing on improving each day and seeing where that takes them. Hopefully, it will be far.”

Senior pole vaulter Matt Schwartz, who finished second in the league finals, and had a personal-best of 14-10 at the Reno Indoor Pole Vault Summit, will be gunning for an even better campaign.

Schwartz will also compete in the long jump where he placed third in the league, and will also see time in the shot put and high jump. 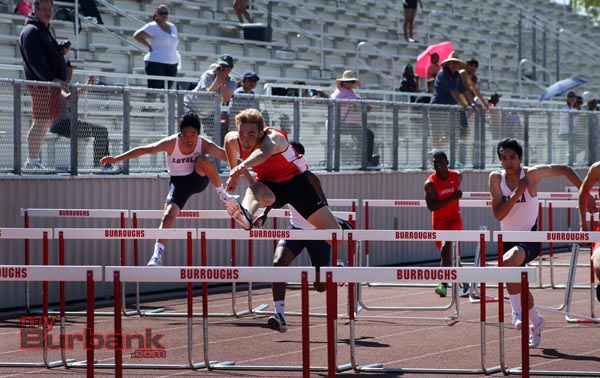 Burroughs Track and Field (Photo by Ross A. Benson)

Junior Corwin Scherer’s best event is the 110 hurdles, but because of his size, strength and speed, will also run the 100, 200 and compete in the triple jump.

Junior Nathan Bradley will attempt to push Scherer in the 110 hurdles, and will see action in the 300 hurdles.

Junior Shane Thompson will participate in the 1,600 and 3,200 and leads the parade of distance runners.

Junior Kent Truong has pole vaulted higher than 12-0, and sophomore Niko Guerrero is versatile so he will compete in the 100, 200, 300 hurdles, triple jump and long jump.

Senior Andrew Williams will see time in the long jump and triple jump, and senior Nick Garduno will compete in the high jump.

The Burroughs girls likewise hope for the best with regard to league action, and have a potent field squad. 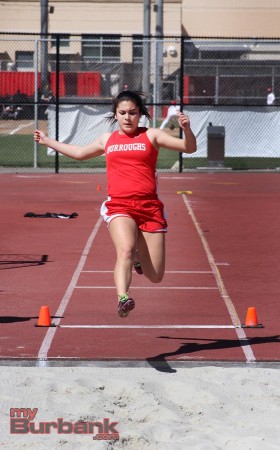 Burroughs will look to jump over the competition this spring (Photo by Ross A. Benson)

“We are not as talented on the girls’ side,” Peebles said, “but the girls are working and focusing just as hard as the boys in trying to improve and become the best they can be.”

Peebles added: “I think our girls’ team will be much better later in the season once they get some more experience competing on the varsity level, and some girls emerge as varsity athletes.”

Sophomore Sarah Prystupa is the reigning league pole vault champion and has cleared 9-3. Prystupa will also try her hand in the sprints.

Junior Breanna McCallum is a triple jumper, and freshman Izzy Funes is a long jumper.

Burbank and Burroughs will battle head-to-head on April 23 at Memorial Field.

Burbank looks to soar to new heights this season (Photo by Ross A. Benson)

The Indians will look to jump over the competition this spring (Photo by Ross A. Benson)

Burbank Track and Field (Photo by Ross A. Benson)

Burroughs Track and Field (Photo by Ross A. Benson)