Several merry attractions and a sense of humor earned Nic and Carrie Nolan first place in the Adult category for the second year in a row in the Burbank Holiday Outdoor Decorating Contest. 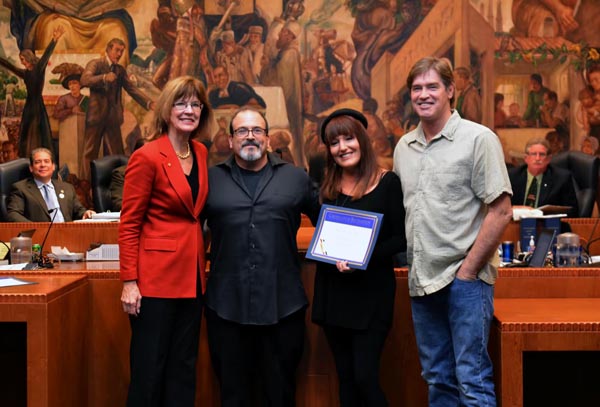 Members of the city’s Civic Pride Committee judged 17 entries in three categories on Thursday evening, said Chairman Robert Vincent. All the winners received certificates from the City Council at Tuesday’s meeting, where Carrie Nolan said that after winning two years in a row, they would not be entering next year to give someone else the opportunity.

The Nolans’  yard, which begins at 246 S. Sparks St. and wraps around onto Oak Street, also won second place two years ago, and their festive scenes just keep growing. There are two animated scenes, a teeter-totter with Santa riding on one seat and reindeer on the other, and then Santa and Mrs. Claus on a swing above the porch. A machine blows fresh “snow” at timed intervals from 5 to 10 p.m. 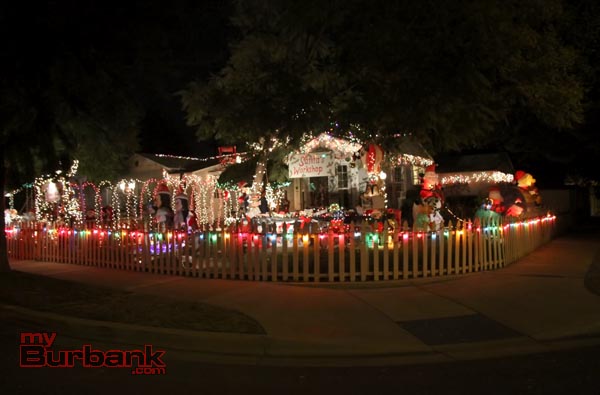 “We do it because the neighbors love it and it’s so much fun. When kids come by you see the magic in their eyes,” Carrie said.

New this year is a roller coaster that reaches halfway across the front yard. Nic started building it from scratch in November. It’s made of PVC and wood. Other new decorations they came up with this year are a cotton candy machine and Mr. and Mrs. Santa Claus making hot chocolate on the barbecue.

“Red lights in the barbecue look like coals and smoke comes out of it,” she said. 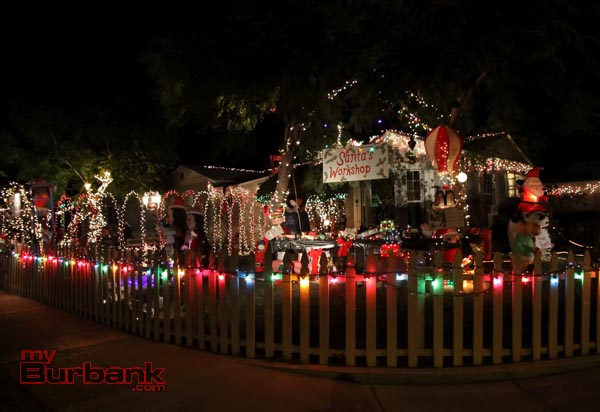 The couple went above and beyond in their style, imagination and beautification of lighting and characters, Vincent said.

“It was obvious they put a lot of attention into the detail, which really evoked your imagination,” he said.

The reward for decorating each year is the reaction she sees from the neighbors and others, Carrie said.

“I just love when people come by they are all happy,” she said. “Everybody in the neighborhood and those who have heard about it thanks us all the time. They get excited when we start to decorate.”

Next year, husband Nic plans to build a Ferris Wheel, but he wants to have it done in time for Halloween, another time of year they decorate, Carrie said.

Carrie’s friends Liz Holt and Evelyn Lopez help her with Santa’s Workshop and other intricate items.

On the Oak Street side of the yard they have all their blow-up characters.

“We put a sign up there that says ‘Macy’s Parade Rejects’ ” she said with a giggle.

There were 13 entries in the Adult category and two each in the Youth and Commercial categories. 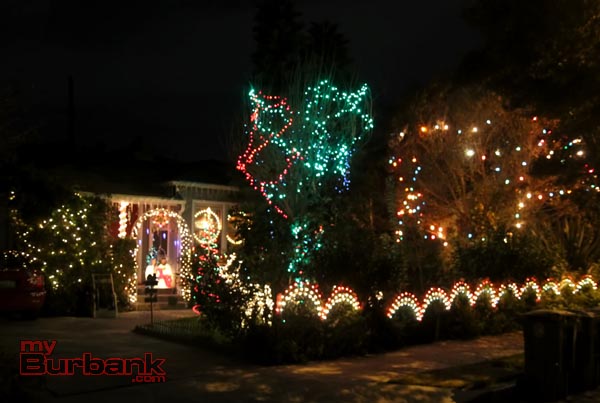 Sophia, Miguel, and Phoenix Santa Isabel won for the Residential Youth Category for decorating their home at 1337 N. Whitnall Hwy.

“The amount of lights, the display of lights and color combination sold us all as a first-place winner,” Vincent said.

Director of Operations Erika Hofmann and General Manager Chris Haven were excited to learn that their Holiday Inn won first place in the Commercial category. Hofmann created the ideas and designed the placement of the decorations. The inside of the hotel is decorated as well.

“We’d like to thank the committee for appreciating all our hard work and we are going to do it again next year!” Haven said.

The theme, “A Season to Celebrate”, was reminiscent of an old-fashioned Christmas, Haven said. 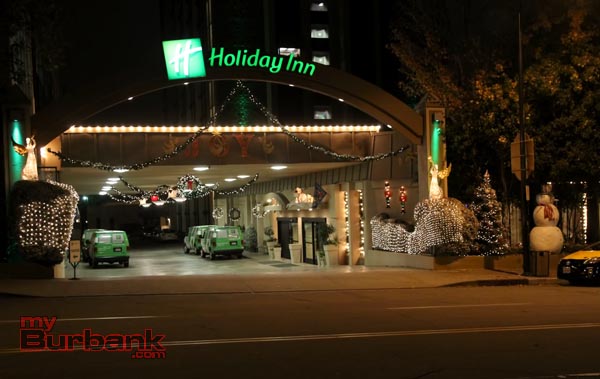 Winner of the Business Division The Holiday Inn. (Photo by Ross A. Benson)

There are numerous Christmas trees, poinsettias and greens leading to the entrance. And just on Thursday night, machines were blowing snow flurries. The hotel management also added Santa and Mrs. Claus and an elf to greet guests. Employees served hot cocoa and fresh-baked cookies. The Harmony Vocal Ensemble, made up of school students from the cities of La Canada, La Crescenta and Burbank, performed holiday carols.

“All the kids just loved it,” Haven said. “The kids sat on Santa’s lap and a lot of people were taking pictures of Mrs. Claus too. This is the first time we added a Mrs. Claus and she was dancing with Mr. Claus while the Harmony Group was singing. It was fun! We had a good time. I think everybody had a good time.”

They won because of their use of a thousand lights, beautiful displays all the way from the entrance to San Fernando Boulevard and Christmas carolers.

“And everybody was having a joyous, festive time!” Vincent said.