Hosted by NBC4 Weatherman Fritz Coleman, the night commenced with a distinctive reception followed by a silent auction leading to a seated dinner and awards presentation.  This year’s award 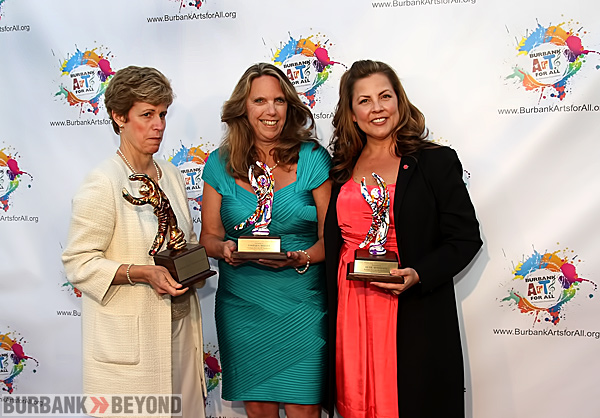 The Party on the Plaza gala event marked the Burbank Arts for All Foundation’s sixth year as a 501(c)3 nonprofit organization providing grant funding to support arts education as a core curriculum in Burbank’s public schools and supporting the Burbank Unified School District’s Arts for All plan. Since it was founded in 2006, the Foundation has awarded more than $150,000 in grant funds supporting projects like new musical instruments, artist in residency programs, professional development for teachers, a new kiln, an animated P.S.A. workshop, auditorium and sound system upgrades and many dance, theatre, music and art productions and projects. 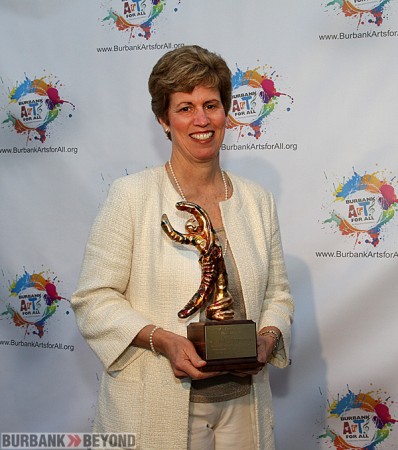 raised the bar in the advancement of arts education and have given so much of their own time which has directly benefited our schools and profoundly impacted the lives of Burbank kids. We are thrilled to pay tribute to them for their remarkable achievements at this special event.”

Honored for establishing the Foundation, Warner Bros. Entertainment Inc. received the Patron of the Arts Award which is presented to a local business or corporation whose support has made a significant impact on the Foundation’s mission.

This award is presented to an educator who dedicates their own personal time to enrich the lives of all Burbank students through their exceptional commitment to furthering arts education for all.

Beth Morrison, a highly regarded and gifted fine arts teacher at John Burroughs High School, was honored with the Arts For All Educator Award for going above and beyond instructional work. She teaches her students that by leveraging their talents, interests, passions, and time, individually and collectively, they can make very positive contributions to the world… and that art is a powerful vehicle that has the potential to change the world. She has introduced her students to fundraising for important causes through their artistic endeavors that have helped raise thousands of dollars in funding for numerous organizations including The Keep A Breast Foundation (a model and inspiration for their Breast Cancer Awareness projects), the Susan B. Komen Foundation for Breast Cancer research, St. Joseph’s Breast Health Center and other breast cancer related organizations.

Her students have also raised money for the Burbank Arts For All Foundation. She collaborates with many core subject teachers at JBHS so they can better integrate visual arts into their curriculum. She also enjoys working with kids and adults involved in the BYSTI program over the summer. A frequent grant recipient, Ms. Morrison embodies the spirit of Burbank Arts for All Foundation by continuing to give back to students in Burbank schools through arts education.

This award is presented to an individual or organization whose volunteer commitment to providing equitable access to the arts has made a significant impact on the students of Burbank Unified School District and the Burbank community.

Honored for her tireless dedication to the advancement of the arts in the Burbank community, Burbank PTA Council President, Barbara Miller, will receive the Champion of the Arts Award. She is an invaluable resource and works with the California State PTA to follow legislative and budget changes regarding all areas of education and in particular the arts. This dedicated mother of three also serves on the BUSD Facilities Oversight Committee, the Superintendent’s Finance Advisory Committee and the Burbank Arts for All Summer School Advisory Committee. Her dedication bridges the mission of Burbank Arts For All Foundation and the PTA and she was instrumental in both organizations becoming Allied Agencies. Through Mrs. Miller’s on-going commitment to arts education as well as her untiring volunteerism efforts, she continues to be an extraordinary advocate for Burbank Arts for All Foundation.

To learn more about Burbank Arts For All Foundation please contact Trena Pitchford, Executive Director of Development at trena@burbankartsforall.org