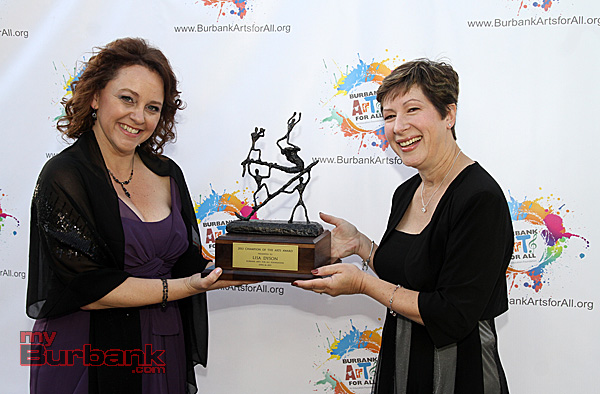 The media capital of the world enjoyed another celebratory evening when Burbank Arts For All Foundation threw its second annual Party on the Plaza Gala extravaganza on Friday, April 26, 2013 at the Networks Garden Café Plaza. The evening brought in more than $150,000 benefiting the Burbank Arts For All Foundation, whose mission is to ensure a quality arts education for every Burbank student.

NBC4 Southern California Weathercaster, Fritz Coleman, served as the evening’s Master of Ceremonies to a sold out crowd of over 300 who were on hand to help honor Warren Stein (Chief Operating Officer of Deluxe), Peggy Flynn (Burbank Unified School District’s Visual and Performing Arts Coordinator) and Lisa Dyson (Parent/Volunteer) for their invaluable contributions to both the Foundation and arts education programs throughout Burbank public schools.

“With the generous support of our many sponsors and gala attendees, the evening surpassed our expectations and we wish to thank everyone who contributed to this worthy cause,” jointly stated Alexandra Helfrich and Craig Murray, Co-Chairs of Burbank Arts for All Foundation. “However, there is still a lot of work to be done in order to ensure that not only students in the classroom today… but future students as well…will be guaranteed a quality arts education.”

The Walt Disney Company’s Joan McCarthy and Telepictures Productions’ Bob Mohler were Gala Co-Chairs; and two-time Emmy-award nominee and star of “Glee,” Dot-Marie Jones, represented the Honorary Dinner Chairs who also included Tim Burton, Dick Cook, Don Hahn, Ron Howard, Garry Marshall and Melissa McCarthy. “Arts education is a vital component in all of our schools and it’s comforting to know that the Burbank Arts for All Foundation has our kids’ backs. The gala was not only a lot of fun…but really inspirational. In fact, I was so inspired…I actually auctioned myself off,” laughed Ms. Jones.

Burbank Arts For All Foundation’s Director of Development, Trena Pitchford, added, “Burbank is the best! With the support of all of our donors, guests and sponsors, the Foundation will be able to directly affect the lives of thousands of Burbank students in the coming year as well as contribute to the Foundation’s daily existence. We’ve just begun to share our impact on students and teachers and we have many more plans ahead for 2013 including our inspirational, one-of-a-kind Creative Circles Forums and engaging community gatherings. The invitation is open to join the movement!”