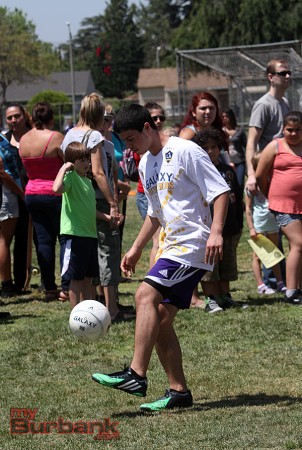 It was a day of fun for all soccer fans (Photo by Ross A. Benson)

So the head of American Youth Soccer Organization Region 254 did just that.

Saturday marked the inaugural “Soccer Fest” 2013, a carnival-like event at Luther Burbank Middle School. More than 1,100 people showed up throughout the five-hour extravaganza.

“Months ago we got in touch with the Los Angeles Galaxy. We came up with this idea. We wanted to bring this to the San Fernando Valley and here we are today,” Barraza said. “It was a lot of phone calls, a lot of time. It has taken months to get a radio station and the Galaxy.”

On display were the Galaxy’s 2011 and 2012 Major League Soccer championship trophies. Also at the event was the Galaxy Riot Squad, the official support group for team. The Riot Squad was helping to recruit more fans to join their group.

The Riot Squad put together a team that played against a team of radio personalities and staff from Exitos 93.9 FM. 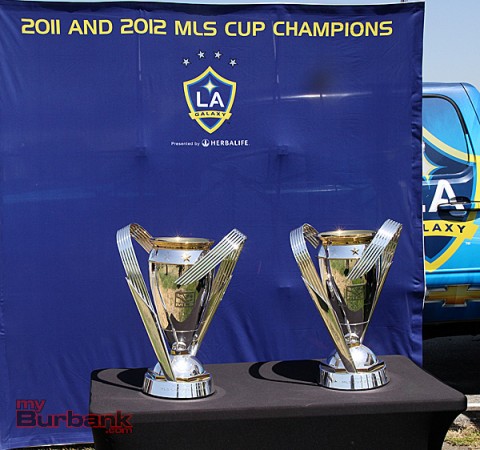 The 2011 and 2012 Major League soccer championship trophies won by the LA Galaxy (Photo by Ross A. Benson)

The Galaxy also ran clinics by some of its academy coaches. The Carson-based club also provided an inflatable soccer pitch where players were able to show their skills on a backyard-sized playing surface.

Also running a clinic was professional women’s player Erika Prado, who once played at Cal State L.A, and most recently played in Russia.

“After I came back from Russia my whole goal was to provide a soccer clinic for any players, for girls or boys,” Prado said. “I would hope more girls would come because there are not as many female trainers. What I do is not just skills, but touch, learn how to receive the ball and having good ball control and taking a player on going forward. I want to provide a clinic where they can use those tools to make them a stronger player.” 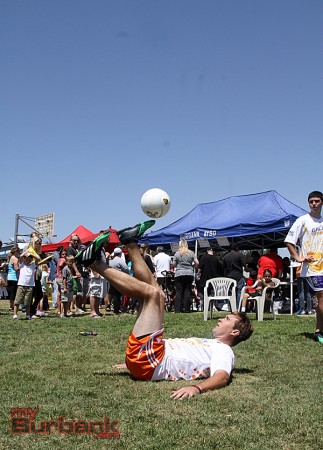 The Futboleros put on a display of soccer skills (Photo by Ross A. Benson)

Players got to see a display of excellence in skill from the Futboleros, a group of soccer ball-juggling magicians.

A number of youth games involving local teams were also part of the festivities. Among them was a game that pitted a local eighth-grade team against the Burroughs High freshmen team.

“I think it’s going to be a good day and people are going to having fun and learn as much as they can about soccer,’’ said Joseph Elijio, 15, and a student at Burroughs High. “I’ve been looking forward to this for two weeks.”

Another player who was excited about the day’s events was Henry Leake, 13, a student at John Muir Middle School.

“We’ve never had this before and there are a lot of people showing up.  It is a lot of fun,” Leake said.

It was also an opportunity for families to sign up their kids to play AYSO in the fall. Barraza said that AYSO Burbank will be close to or will pass their numbers from last season in registration numbers. It was a great day for the entire Burbank soccer community.

“We feel that the event went great and look forward to bringing more fun and exciting events to Burbank including Soccer Fest 2014,” Barraza said.