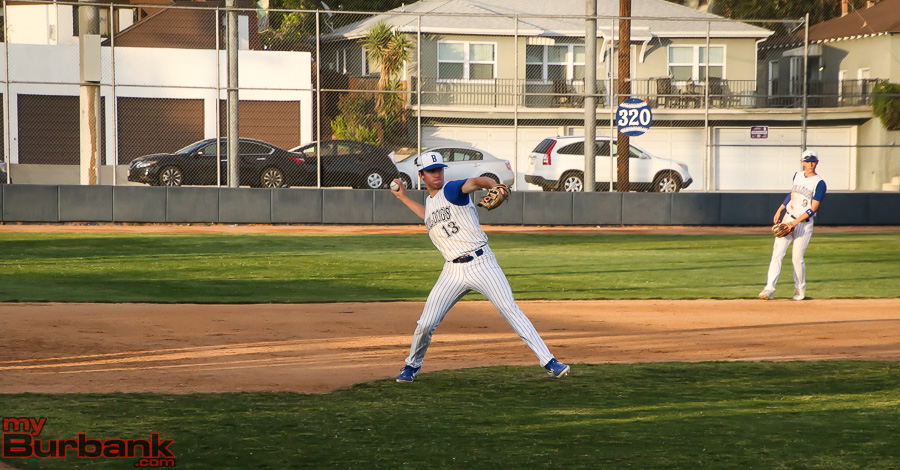 An early four-run cushion by the Burbank High baseball team wasn’t enough production against visiting Pasadena in a Pacific League game as it dropped a 15-5, five-inning decision on Tuesday afternoon.

During the nine-run, fifth-inning outburst, Pasadena sent 12 hitters to the plate with eight reaching on hits that included a grand slam to right field by sophomore Michael Gonzalez, who finished with three hits.

Gonzalez’s base hit to center in the second at-bat of the frame scored a run as did senior Robert Olivades, junior Jon Luke Goldman (two hits), sophomore Jesus Zuniga (two hits including a triple) and senior Christian Zambrano (two hits that included a three-base hit).

Down 10 runs and in order to avoid the 10-run mercy rule, Burbank needed to score at least a run and came close.

Junior Dominik Severo led off with an infield hit, but was erased when junior Jakob Duarte bounced into a double play and when senior Cody Winters struck out looking, the game was over.

“We were missing a lot of pitches that were down and by us not finding that sweet spot, we were leaving the ball up and they were hitting the ball,” Burbank coach Bob Hart said. “I don’t think they’ve had that kind of offensive showing based on the stats that I’ve seen.”

Senior Davis Mieliwocki was hit by a pitch and later came around to score on a single to center field by Severo.

Burbank stretched its lead to 4-0 on Winters’ double to left field that scored Lee and Severo.

Pasadena cut into the advantage 4-1 in the second when junior Hugo Escobedo lifted a sacrifice fly to left that brought home Zambrano, who lined a one-out triple to left center.

A four-run third inning by Pasadena (11-11 and 6-5 in league) made it 5-4 as 10 batters made their way to home plate that included three hits and two Burbank errors.

Zambrano’s force out scored a run and Escobedo’s base hit to left field also knocked in a run.

“We’ve never had an offensive game like that today, so it was very fun to watch,” Pasadena coach Mike Parisi said. “We’ve been working hard on keeping the ball out of the air and trying to hit line drives and let the ball travel.”

Parisi, who was at Pasadena for eight years and two at La Salle, has guided the Bulldogs to the CIF Southern Section playoffs seven of the eight seasons, knows that nothing’s guaranteed.

“If you don’t come to play, any team can beat anybody,” he pointed out. “There’s a lot of baseball left. There’s three games left. Every game’s a dogfight. We’re fighting to get into the playoffs.”

Burbank, which committed three errors to a pair for Pasadena, leveled it at 5-5 in the third when senior Daniel Ruiz opened up with a single up the middle, took second base on an error, third on Lee’s single to right field and scored on Severo’s grounder.

Goldman worked an inning, hit a batter, walked a batter and allowed three hits, senior Jordan Zach tossed three innings, striking out four with a walk and three hits allowed and was credited with the win and senior Gavin Nouskajian pitched one inning, gave up one hit and fanned one.