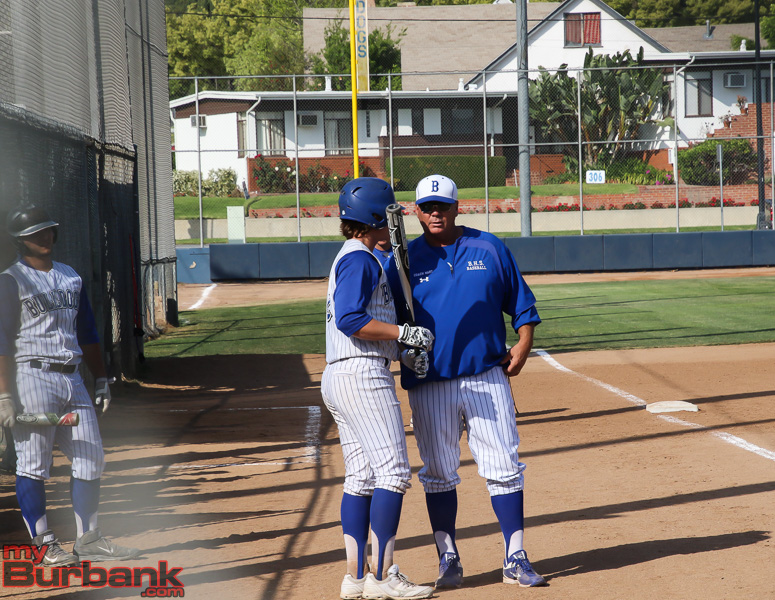 Then came the fateful fifth as Leake, a senior, allowed his first hit to senior Kewin Ledesma, a run-scoring single to right field, and when the frame was over the Falcons trotted eight hitters to the plate and scored four runs with the help of three errors and eventually pulled away for a 7-0 triumph.

“You’ve gotta play catch,” Burbank coach Bob Hart said of that fifth inning and saw his club commit five. “They did a lot better job of that than we did.”

The Falcons (19-1 and 8-0 in league) are one of top teams in the CIF Southern Section and now own an impressive 17-game winning streak.

“Our guys hung in there and they competed well, especially Henry,” Hart said. “Crescenta Valley has good hitters and they’re a well coached team.”

In that ragged fifth, senior Will Rees also produced a run-scoring grounder and freshman Will Grimm singled.

Clark worked one inning, allowing three hits with one strike out and one hit batter.

“They had some timely hits,” Hart said of the Falcons, who finished with five overall. “That was the difference. They didn’t get a lot of hits, but they were timely.”

Beer’s three-hit, complete-game shutout, saw the left-hander keep the Bulldogs (9-6 and 5-3 in league) off stride as he struck out six and walked two.

“Henry kept us off balance early in the game,” he said. “We have 21 guys and all 21 guys have played. We just kept plugging away.”

Senior Jonathan Castaneda led off the first inning with a walk, but sophomore Davis Mieliwocki and Leake both grounded out as Castaneda advanced to third base.

Junior Abiezer Delgado walked, but Beer then induced senior Chris Minnick to ground out to end the frame.

With one out in the second inning, senior Branden Phillips singled to center field, but Clark and junior Max Meltzer both fanned.

Beer was perfect in the third, setting down Castaneda on a grounder, Mieliwocki on a pop up and Leake on a strike out.

With one out in the fourth, Minnick singled to right field, Beer’s wild pitch moved him to second base and a sacrifice by junior Matthew Shaugabay to third base, but Phillips lined to right field.

Beer fanned senior Christian Guerra to open the fifth and commenced to strike out Meltzer and Castaneda.

Beer retired the side in order in the sixth inning, getting Mieliwocki to line out to the shortstop, Phillips on a fly out and Delgado on a liner to left field.

Minnick led off the seventh with an infield hit, but Shaugabay lined to right field and Phillips bounced into a game-ending double play.

Leake had his full assortment of pitches working as he retired the side in the first inning, inducing Ledesma and Grimm to ground out and senior Scott Vinceri to fly out.

Beer grounded out to lead off the second inning and senior Anthony Russo and senior Max Meyer both fanned looking.

Another 1-2-3 frame followed as senior Nico Arredondo grounded out, senior Jaimy Blank flied out and Rees grounded out.

In the fourth, Ledesma was safe on an error, but Grimm bounced into a force out, while Vinceri flied out and Beer struck out.