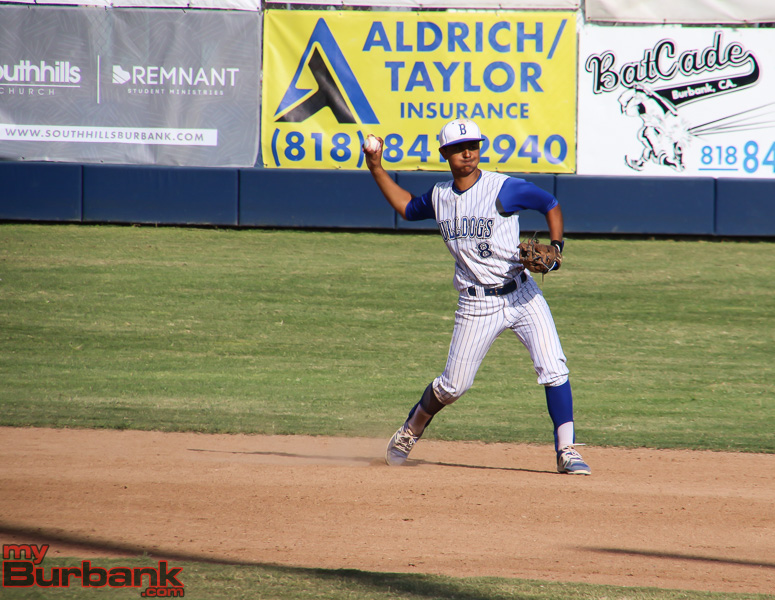 Fittingly on Senior Night, a pair of upperclassmen for the Burbank High baseball team helped push the Bulldogs to a 5-1 Pacific League triumph over visiting Burroughs on Tuesday night.

“This was a big moment for him,” Burbank coach Bob Hart said of Guerra. “This was Senior Night and though he hasn’t had the season he wanted, he showed what he’s capable of doing.”

The game was notched at 1-1 heading into the bottom of the sixth when senior Henry Leake walked to open the frame.

Junior designated hitter Abiezer Delgado was safe on a fielder’s choice and Leake scurried to second base on an error.

Junior Matthew Shaugabay was hit by a pitch and up stepped Guerra, who worked the count to 3-2 and then lined a Matthew Rudas fastball that made it 3-1.

“We might not be the most talented team, but we fight hard and we scrap,” Hart said. “We don’t take anything for granted. We fight for everything.”

The third run came in on a balk and Burbank’s advantage became 5-1 on junior Max Meltzer’s sacrifice fly.

The Bulldogs (14-8 and 10-3 in league) led 1-0 in the third inning when Meltzer singled to right field, and then stole second base.

Sophomore Davis Mieliwocki’s base hit to center advanced Meltzer to third base and scored on senior Chris Minnick’s single.

The Indians (12-13 and 7-6 in league) evened it at 1-1 with a run in the fourth inning when junior Nathan Palafox led off with a single to left field.

Freshman Adan Perez came in as a pinch runner and junior Daniel Leonard (two singles) moved him to second base on a grounder. Perez eventually came around on an error.

“I’m proud of my guys,” Burroughs coach Craig Sherwood said of his team who have a home game on Friday at 6 p.m. against the Bulldogs. “But you have to take your hat off to Burbank. They were the better team tonight.”

Sherwood continued: “It’s one game, but we’ll be back. That’s baseball,” he said.

Lungaro retired the side in order in the first and squirmed out of a second-inning jam.

Junior Andrew Jacob Barrera doubled down the left-field line to open the frame and took third on Leonard’s single to left.

“I try and come out and just relax,” said Lungaro, who struck out seven. “I just want to hit my spots and not worry about all the stress. I felt pretty confident that we were going to win.”

Five batters went to the plate for the Indians in the third including sophomore Niccolo Chuidian, who led off with a single to left.

Freshman Ricardo Perez was safe on an error and advanced to second base on senior Brandon Martinez’s grounder, but senior Justin Palafox flied out and Barrera fanned to close the inning.

Martinez’s one-out single in the fifth was followed by Justin Palafox striking out and Barrera grounding out.

After Leonard’s one-out single in the sixth inning, Giraldo then flied out and Diaz grounded out.

Lungaro struck out Chuidian to open the seventh, Perez bounced back to the box and Martinez lined out.

Rudas, a senior, toured five-plus innings, allowing four hits with five strikeouts and one walk and five hit batters, while junior Brandon Ortega went one inning and nicked one batter.