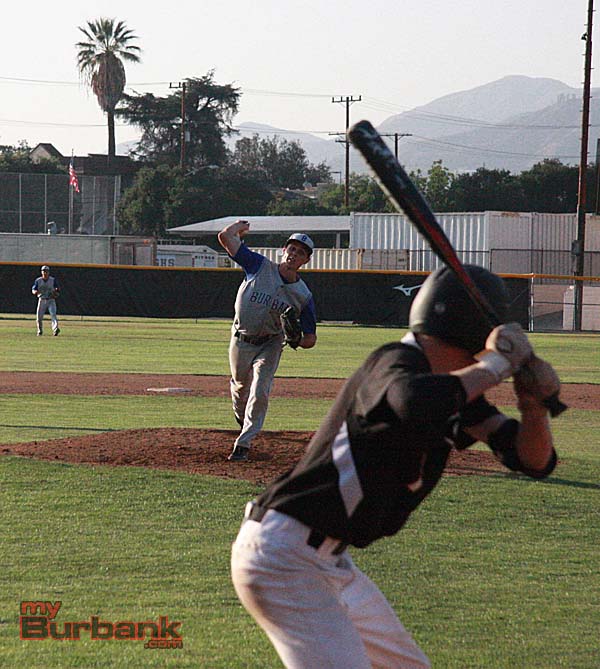 You could smell the fabulous food of Scarantinos in the air but it wasn’t just the amazing Italian food to look forward to on a Tuesday afternoon. March 31 represented the beginning of the Pacific League baseball season so why not come to Glendale for a dose of Burbank baseball followed by a heck of a dinner?

Burbank feasted on an error-prone Glendale team and salvaged their fifth win of the season with a convincing 7-2 victory. The dinner afterwards was even better.

“We are always about league because everything else is gravy,” said Burbank coach Bob Hart, no pun intended. “This is not tournament ball. You want to play your best ball every time out but I’d rather play my best ball the second half of the season rather than the beginning.”

Trailing 1-0 after two innings, the Bulldogs struck for two runs courtesy of a Randy Higgens double down the left field line and the first of six errors by the Nitros on the day.

Burbank (5-5, 1-0) broke the game open just as their fellow softball peers did not too far away with two runs in the fifth and three more in the sixth to take a commanding 7-1 lead. Glendale (2-9, 0-1) was extremely inept in the sixth inning with a comedy of errors allowing the Bulldogs to bat around and make a mockery of what was a close battle.

The Bulldogs were led by Ryan Porras who had four hits on the afternoon and Garrett Dolan who produced a fine outing on the mound throwing six innings and allowing just two hits and one run.

“Anytime you go for four hits in a high school game you are doing something right. We put him in the two spot and he did the job there. He played solid at first base as well and made some nice plays over there,” Hart said. “Garrett settled down and found his rhythm. He wanted to go the distance but we have him on a pitch count. He did a great job.”

“We knew we could win,” added Porras. “If we could get out in front, we could hold the lead. When we got out in front we had a mentality to keep going.”

Burbank has shown flashes of a promising season having defeated City stalwart El Camino Real, 2-1, while playing City power Chatsworth to a 4-1 loss. BHS owns the high desert having knocked off Palmdale and Highland.

Next up is an early test at Arcadia on Friday followed by a home contest against Pasadena on April 7. Pasadena rallied from a 3-0 deficit scoring five runs in the bottom of the sixth inning to stun Burroughs who entered the game 10-3 and recent champions of a tournament in Phoenix, Arizona.

It’s a 14-game league jaunt and the Bulldogs are ready to pounce on the opposition and return to their winning ways of 2013.

“We want to win league so it’s a good start for us,” said Hart. “We know this is what we play for.”