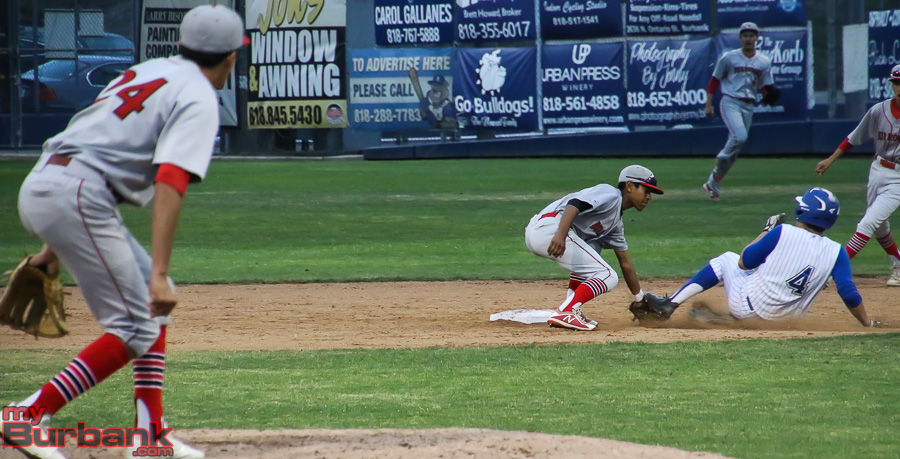 One could say that this was the cherry to the ice cream sundae.

Having already had its greatest victory of the season come in the form of the return of coach Bob Hart following a heart attack, the Burbank High baseball team finished its regular season with a 6-3 win over visiting Burroughs Friday night.

“To see them stick together and persevere and have a moment like this, it doesn’t make up for every loss we had but it certainly (helps),” Hart said. “We want to win and you try to win but at the same time, you try to build character. I don’t feel like I’ve fallen short in that area. I can always get better as a coach. I strive to get better, I stay humble. But in terms of the character development that we showed and the camaraderie, I’ll take that to my grave and be very happy. “

Burbank (8-13 overall, 6-8 in the league) got things started on a solo home run by Davis Mieliwocki in the first inning.

They added a pair of runs in the third inning as Mieliwocki, Matthew Shaugabay, Abiezer Delgado and Ryan King each had a single.

Burroughs (13-15, 7-7) knew before the game that it had clinched fourth place in the league and a CIF playoff berth.

“The bottom line is you have to get in. I made sure all 10 seniors played tonight and they hung in there,” Burroughs coach Craig Sherwood said. “The playoffs are special. Once you are in and experience it and every pitch is important, that’s why you play and that’s why you coach.”

The Indians didn’t score until the fourth inning when a line drive by Revin Diego hit Burbank starter Andrew De La Torre on his throwing arm. He left the game and didn’t return.

Devin Esquivel scored later in the inning on a bases-loaded walk.

Burbank scored three times in the bottom half of the inning, paced by a two-run double from Shaugabay that scored Max Meltzer and Matthew Moreno.

Burroughs rallied with two runs of its own in the fifth inning.

Burbank was able to eventually get things under control as freshman Ryan King pitched a pair of scoreless innings to end the contest.

“You want them to create memories for themselves. It’s meaningful. It has been tough. My own personal adversity has been tough. I found a lot of strength and courage from them,” Hart said. “Coaching is about giving but it also about what you get back. I couldn’t be more proud of the guys. I’d love to go undefeated, I’d love to make the playoffs. That’s part of the goal, but it is also about creating that bond and we definitely have that. “