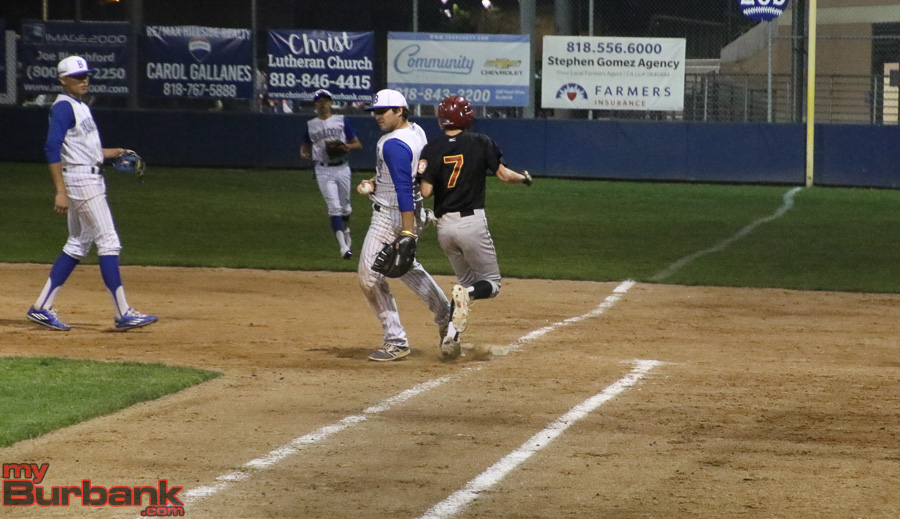 This wasn’t an ideal start for the Burbank High baseball team when it faced visiting Arcadia on Friday night.

By the second inning, the Bulldogs fell behind by a run, through three they were looking at a five-run deficit and after the fourth inning, trailed by a half-dozen runs.

Quit they would not, and despite the burden of eight errors, Burbank rallied for five runs in the fifth and getting within one run, but ultimately fell 9-6 in a Pacific League game.

“When you play kick the can, it’s hard to win games,” Burbank coach Bob Hart said. “You dig yourself a hole, it’s tough to come back. But I was really proud of my guys tonight because they showed resiliency and it’s something we constantly talk about. I’m proud of them for hanging in there and battling and getting engaged.”

That frame is something that the Bulldogs can use as a confidence booster, but on Friday, it put a genuine scare into the Apaches, the top-rated team in the CIF Southern Section Division III, who are 11-0 overall and 2-0 in league play.

“Tonight was one of the first night’s where we showed a little courage,” Hart said. “And it’s something for us to build off of. I believe in my guys. It’s not some false belief.”

Eleven batters trotted to the plate for the Bulldogs (2-7 and 0-2 in league) in the fifth with four getting on base via a hit.

Senior Abiezer Delgado, who doubled off the left field fence in the second inning, had the big blow, a two-run single to center field.

Senior Matt Moreno led off the inning with a single up the middle and scored on Spens’ hit.

Burbank tacked on a run in the seventh when junior Matthew Porras had a run-tallying infield hit that scored senior Matt Shaugabay, who doubled to left field with one out.

The Apaches pulled ahead 1-0 in the second inning without the benefit of a hit, but four errors helped their cause.

Arcadia scored four runs on five hits in the third inning as junior Dominick Tello had a run-scoring single to right field.

Senior Andrew Scannell then added a two-run single to right center off junior Joey Clark, who ventured four innings while surrendering six hits with six strikeouts and one walk.

Senior Tyus Santa Ana had a run-scoring hit to right center in the fourth inning that made it 6-0.

Arcadia’s advantage swelled to 8-5 after a two-run sixth inning, which was helped by Burbank committing two errors and saw junior Jeffrey Castillo (two hits) drive in a run with a double to left center.

Junior Jacob Duarte went three innings and yielded two hits with three strikeouts and two walks with a hit batter for the Bulldogs, who lost to Arcadia 9-0 on Tuesday.

Sophomore Chris Wilson was credited with the win after working four scoreless innings with seven strikeouts and one hit allowed.