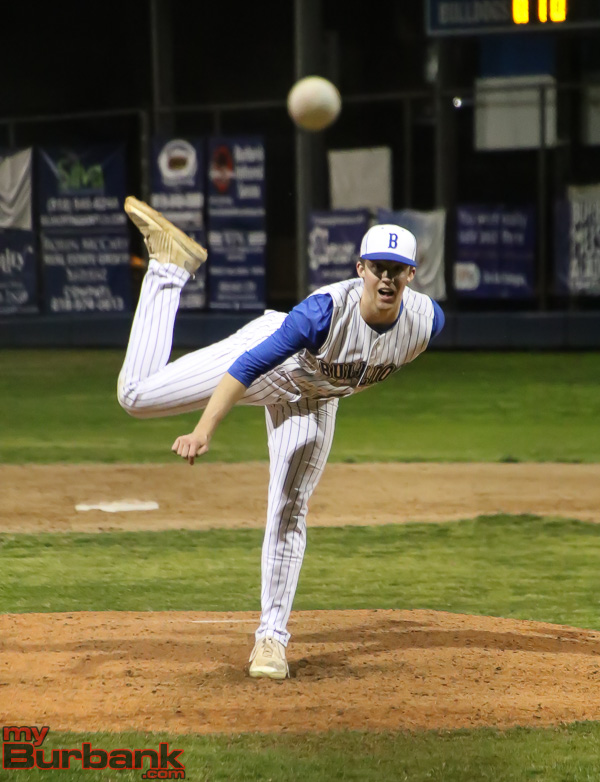 For six innings, the Burbank High baseball team managed to score only two runs and trailed by two runs entering the seventh inning.

This all changed as a three-run seventh proved decisive for the host Bulldogs, who rallied and tamed Muir 5-4 in a Pacific League match on Friday night.

Seven batters came to the plate including senior Andrew De La Torre, whose single off senior Brian Love, the losing pitcher, settled into right field as junior Troy Lee, who was safe on a fielder’s choice, scored the game-winning tally.

“Finding a hole and putting the ball anywhere,” De La Torre said of his game-winning single.

When the Bulldogs trailed it looked as though the Mustangs were in position to even the season series at a game apiece.

Was there any doubt that Burbank would win?

“Maybe once or twice, but then we found a way to get it back and pick it up,” De La Torre said of the rally. “We just wanted it more than they did.”

Two batters earlier, senior Cody Winters knocked home two runs with a sharply hit ball that found its way to left field as sophomore Ryan King, who led off by reaching on an error and senior Davis Mielowocki, who walked, both scored.

Love went two and two-third innings, striking out one, walking one with three runs allowed and three hits.

Muir (6-3 and 0-2 in league) is much improved this season after opening its campaign with five straight wins.

“They have speed,” longtime Burbank coach Bob Hart said of the fleet-footed Mustangs. “Speed is a tough opponent sometimes. But the key to that is not give away free bases.”

Though down by two runs entering the seventh, Hart remained confident.

“This team has shown that ability where they’re not going to just sit down the last two innings and call it in,” he said. “Sometimes when you’re chasing one run and that team gets one more, it’s like the nail in the coffin.”

The Mustangs, who lost at home 1-0 to the Bulldogs on Tuesday, scored two of their runs without the benefit of a base hit in the first and third innings.

Burbank (2-3-1 and 2-0 in league) leveled it at 1-1 with a tally in the second inning when junior Jakob Duarte walked with one out.

Junior Adam Loera entered as a pinch runner and then advanced to second base on a balk and third base on De La Torre’s single to center field.

De La Torre took off for second base hoping to draw a throw and did, but put on the brakes and raced back to first base.

While this was transpiring, Loera sensed it was time to run and blasted off for home plate with the run.

Burbank tied it at 2-2 in the fourth inning when junior Oaklee Spens lofted a sacrifice fly to left field with one out.

Duarte led off the inning with a double off the screen in right center and advanced to third base on a sacrifice bunt from De La Torre, who also singled in the sixth inning.

Muir, which stole six bases, took a 1-0 lead in the first inning when Mielowocki issued a one-out walk to senior Aryonis Harrison.

“I just wanted to make sure I got ahead with my strikes,” Mielowocki said of his outing that saw him fan the side in the second and fourth and strike out two batters in the first and third. “Make sure I could work off that first-pitch strike. Hopefully get some guys out. Have some guys roll over and have my defense work behind me.”

King was credited with the win after touring two frames, giving up two hits with one strikeout and one hit batter.

Harrison then stole second base and third base and scored when Mielowocki uncorked a wild pitch.

Mielowocki walked junior Harper Taylor with two down, but was left stranded when senior Tobias Humphrey struck out.

The Mustangs collected a run in the third and forged ahead 2-1 when Mielowocki walked senior Tyquise Solomon to begin the inning.

Solomon swiped second base, took third base on Mielowocki’s wild pitch and scored on a run-producing grounder by Harrison.

Harrison stole second base, took third on a sacrifice bunt from Aryonis Harrison and scored to make it 3-2 on a single to center field by junior Ely Resendiz.

A solo run in the seventh gave the Mustangs a 4-2 edge as senior David Solis was nicked with a pitch by Kings to start the inning.

Solis stole second base and with two out, Solomon delivered a bloop single to left field that plated Solis.