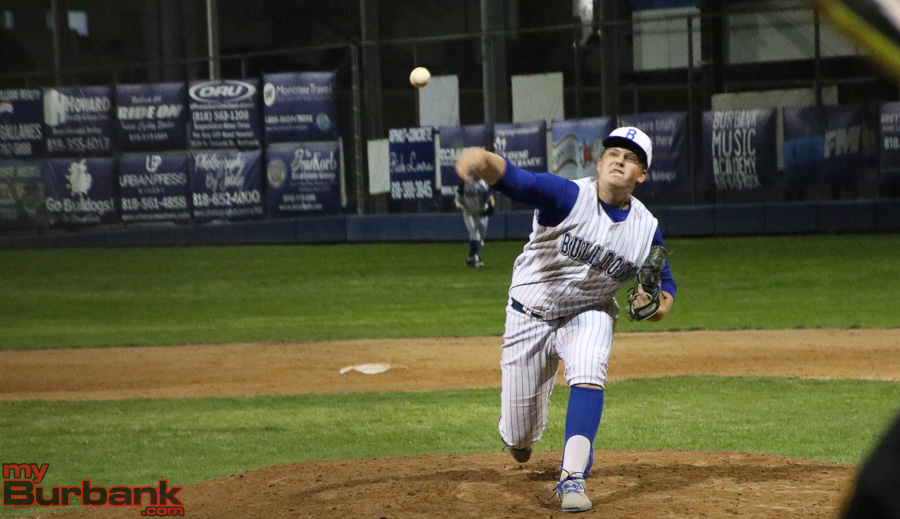 Big innings often act like knockout punches and it surely did for the Burbank High baseball team on Friday afternoon.

Ahead by only two runs entering the top of the seventh inning, the Bulldogs scored six times as 10 batters went to the plate and in the process helped them earn a 9-1 decision over host Glendale in a Pacific League match.

Capalbo, who was filling in for Bob Hart, who was ejected from Tuesday’s game and wasn’t allowed to be there on Friday, said the pitching change in the sixth inning was the turning point.

“The big moment for me was when we had to go back out there and we’ve got Ryan King, who’s a freshman on the mound. He just came up from JV and we had the ball in his hand and him finishing off and just seeing his face coming off and for us that moment we finished what we had to and the bats came alive.”

Capalbo said he was confident in King, despite his youth.

“The kid throws strikes. He’s thrown for us in winter league and some tournaments,” he noted. “The way he pitched with runners on. I couldn’t have asked for anything more.”

Porras singled to center field with one out and Troy Lee doubled to left center. Two batters later, sophomore Oakley Spens floated a single to right center that brought both runners home.

Neither team scored in the first two innings, but the Bulldogs, who defeated the Nitros 11-3 on Tuesday, woke up in the third frame as senior Matt Shaugabay, who scored two runs, had a two-out double to left center, moved to third base on a passed ball and scored on an error.

In the bottom of the frame, the Nitros (3-10-1 and 0-4 in league) evened it at 1-1 when junior Nolan Wong was hit by a pitch from junior Daniel Ruiz, who went three and two-third innings, yielding one hit and six walks with two hit batters and four strikeouts.

Junior Ryan Kataoka walked to lead off the third inning and later crossed the plate after advancing to second base on a walk to junior Adrian Coll and third base when sophomore Thomas Kovarik was nicked by a pitch.

Junior Jacob Duarte was credited with the victory after toiling one and two-third innings while giving up two hits, walking two, hitting a batters and fanning four.

King, who began the contest in right field, was given the save after coming in with one out in the sixth inning. King worked one and two-third innings and gave up two walks.

The Bulldogs collected nine hits that also included a single from senior Abiezer Delgado and a double by junior Davis Mieliwocki.