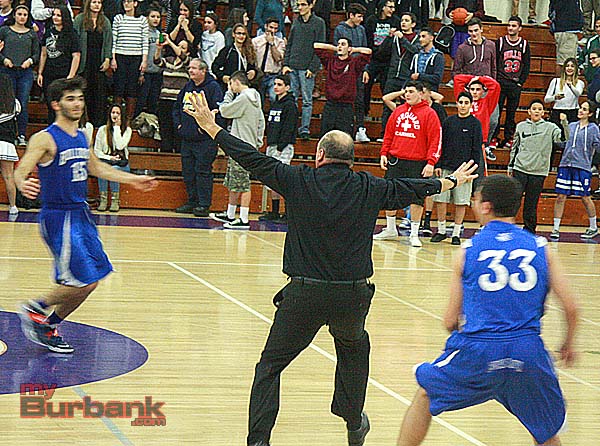 Burbank coach Jerry DeLaurie must feel 200 pounds lighter. The gorilla is finally off his back.

After suffering eight defeats by six points or less this season, the Bulldogs finally prevailed in a close contest. Down 43-41 to begin the fourth quarter, Burbank rallied for a heart-thumping 57-56 win on the road against Hoover Friday night. 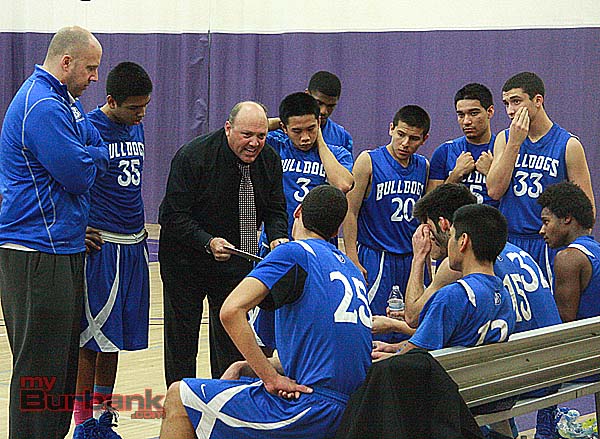 “We finished!” DeLaurie said emphatically. “We had to win a close game. It’s so easy for high school kids to get down. It’s about life. When things are going tough, you keep working hard. Our motto was one thing, ‘finish.’ You don’t give up.

“It’s a testament of character, pride, hard work and perseverance. That’s Burbank basketball. That’s how we are always going to play.”

Having lost the first two games of the week at Muir (62-58 in overtime) and at Crescenta Valley (55-49), the Bulldogs were desperate for a win. It just wouldn’t be that easy. 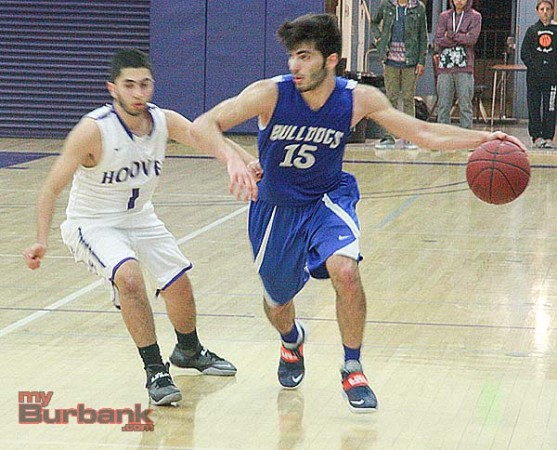 Leading 56-54 with 23 seconds left, senior Richard Elmoyan made one of two free throws to give BHS a slim three-point advantage. Hoover came down looking for the game-tying three-pointer but Alex Chrishyan misfired from left wing only for the Tornadoes to grab the offensive rebound.

Teo Davidian, who scored a game-high 16 points, then threw up a desperation heave from the right corner that fell short and into the hands of teammate Argin Sarkisian who promptly got fouled by Elmoyan and converted the layup with a second remaining.

With looks of “Are you kidding me?” strewn across the faces of the Burbank players and coaches, fate would be on the Bulldogs side this time. Finally.

Sarkisian went to the foul line and missed the free throw to tie the game. Burbank’s Anthony Kardosh rebounded the miss and the game was history. Time to exhale, Bulldog fans. 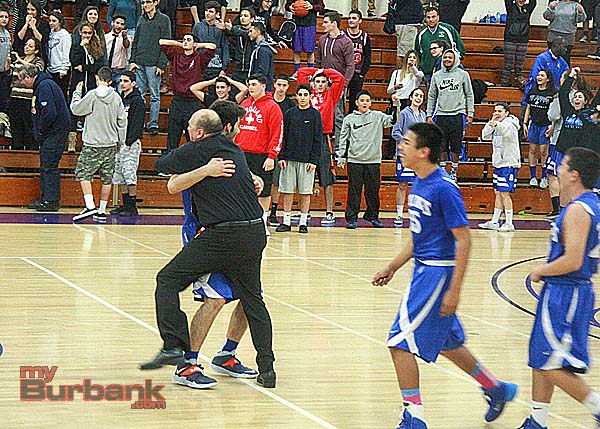 DeLaurie and Elmoyan embrace after the victory (Photo by Dick Dornan)

No one was more excited than DeLaurie who ran on to the court with his arms outstretched in the air. Running across the court as if he were Jim Valvano, DeLaurie hugged Elmoyan and together coach and captain celebrated the much-needed victory.

“We have been in so many close games. Our kids stayed focused,” said DeLaurie. “We had the Muir game won, we had the CV game won, and they both got away. For us to come on the road, the third game of the week, and win is a testament to our kids.”

“The past few games were really close and coach told us recently to ‘keep finishing, keep finishing,’ Elmoyan added. “Last game we got closer, today we pulled through. Beating them (Hoover) on senior night was fun.” 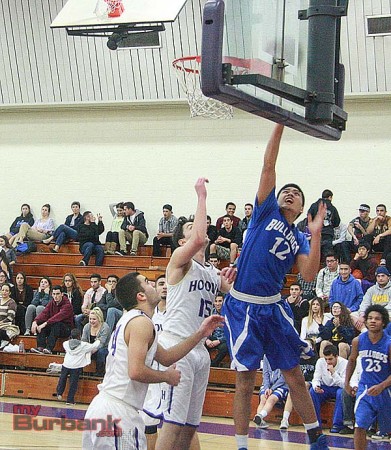 Adam Pasco scores for the Bulldogs (Photo by Dick Dornan)

Burbank (11-13, 5-7) led 15-13 after the first quarter and took a 27-24 lead into halftime after Ben Chavez rebounded a missed three-point field goal by Danny Terrones and scored as the second quarter ended.

Hoover (13-11, 4-8) outscored the Bulldogs in the third quarter, 19-14, behind the hot shooting of Davidian and Arlen Moradi who each had two treys in the period.

The stage was set for an exciting fourth quarter of high school basketball. The question was simple and clear.

Could Burbank win this close game? They answered with a resounding yes.

The Bulldogs scored the first five points to take 46-43 lead early in the fourth. The Tornadoes came back with four consecutive points to regain the lead.

Elmoyan’s driving layup and subsequent foul shot pushed Burbank back ahead, 49-47, with 3:40 left.

Elmoyan added another layup and Kardosh’s rebound tip-in made it 55-50 in favor of the Bulldogs at the 1:06 mark.

Burbank made it interesting by missing three free throws over the last minute of the game giving Hoover the chance to close the gap and eventually having a shot to tie the game. 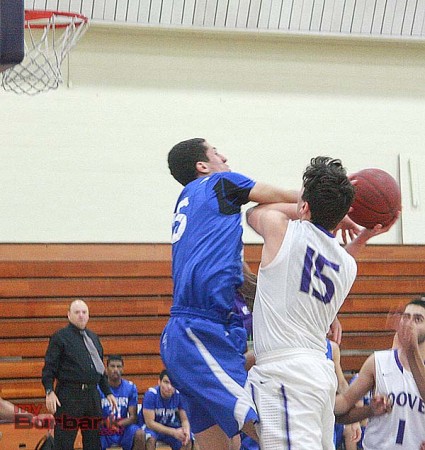 In the end, the Bulldogs held on. Any win is a good win and on this day Burbank willed itself to victory lane.

“We had enough composure to win. The ball finally bounced our way,” DeLaurie said. “I’m really proud of them.”

“We focused more before the game. We were mentally prepared,” Kardosh said. “The last two games were hard on us. We knew this was a big game and we prepared ourselves.”

Burbank has an outside shot at the playoffs but they must win against Glendale at home on Tuesday and at Burroughs on Thursday night to keep their postseason hopes alive.

Mike Woods sets up the offense (Photo by Dick Dornan)