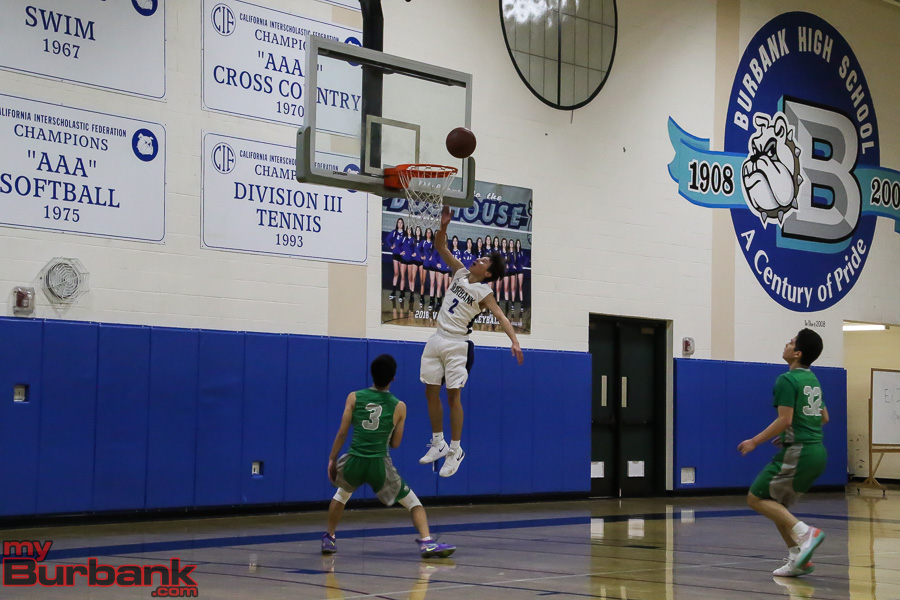 A win is a win no matter how one finds it, and the Burbank High boys’ basketball team will gladly accept it.

On Friday night, in what may turn out to be a season-changer, the Bulldogs exhibited true grit and determination after leading throughout, and then holding off and escaping with a 74-72 victory over host Crescenta Valley in a Pacific League contest.

The Bulldogs shot 49 percent from the floor (26 of 53), but only went to the free-throw line 11 times and converted six.

“They shot 17 free throws to our one going into the fourth quarter,” first-year Burbank coach Ernest Baskerville said. “I told the team don’t let the fouls dictate how we’re going to play.”

Baskerville said his players have the green light, under one important proviso. “I let my guys shoot the ball, but they have to be open.”

The key statistic was Burbank (6-4 and 2-2 in league) knocked down 14 three pointers.

Crescenta Valley did make 20 of 23 (86.9 percent) from the charity line and changed its philosophy in the second half when it went strong to the hoop rather than settle for outside jumpers like it did in the opening half.

“I was pleased with our first half defense,” Baskerville said. “We didn’t give up a lot of paint touches in the first half.”

Senior Miles D’Agostin and junior Leo Tahmasian each scored 19 points for the Bulldogs, who had 11 treys at the half when they built a 47-28 lead.

Leading the Crescenta Valley’s offensive was junior Tyler Carlson, who dropped in 16 points and it was Carlson’s three-pointer at the buzzer that fell short of the mark.

Burbank established a 20-10 advantage heading into the second quarter as D’Agostin made three treys while Tahmasian scored four points.

Burbank shot 56.6 percent from the field at the half, making 17 of 30, while the Falcons drilled nine of 30 (30 percent) from the field and eight of nine charity tosses.

D’Agostin chipped in with 14 points at the intermission, Tahmasian had 12 points and Clark scored eight points.

Crescenta Valley, which shot 37.5 percent (24 of 64) from the field outscored Burbank 18-13 in the third period with Carlson scoring six points as the Falcons fell behind 60-46 .

The Falcons, who shot 44.1 percent in the second half (15 of 34 ) erupted for 26 points in the fourth quarter while the Bulldogs scored 14 points with D’Agostin and Tahmasian each dropping in five points.