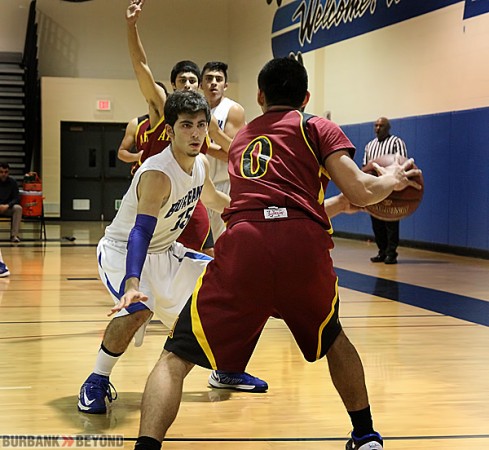 As Pacific League action begins tonight, Burbank coach Jerry DeLaurie has one major goal in mind: finish games. The Bulldogs went 6-6 in the non-league portion of its schedule. In order to make another postseason berth, Burbank will need to find a way to win the close games as they did a year ago.

During DeLaurie’s first season as coach, the Bulldogs won nine games by six points or fewer. They shot 43% from the field and 72% from the free throw line as Burbank went 16-13 overall and advanced to the second round of the CIF playoffs.

With his system now in place and the players adhering to his program philosophies, one would think that BHS would take the next step in its quest to become a top tier team in the Pacific League year in and year out.

Yet wins have been hard to come by this season due to the Bulldogs’ ineffectiveness to shoot the ball. They have shot poorly in areas they succeeded in last year and the result is in the pudding: Burbank has lost five games by five or fewer points.

“We are just having a tough time putting the ball in the bucket. If we remotely shoot like an average team, we could be a top three team in league,” DeLaurie said. “It’s a mixture of being mentally focused and believing in yourself. We are not good enough to take plays off. Playing hard will keep us in games.”

There is never a doubt that DeLaurie’s teams will play hard defensively. If a player doesn’t give maximum effort, he will find a seat with the coaches’ best friend: the bench. Burbank’s defense has been outstanding limiting teams to 46 points per game.

If it were not for Burbank’s tough, aggressive defense, the Bulldogs could very well be 3-9. Then again, if it were not for a struggling offense in search of consistency and production, Burbank could be 9-3 at this moment.

“The effort and defense is there. We are aggressive no doubt. We play hard, we rebound well, play strong team defense, dive for loose-balls,” DeLaurie said. “We can get stops on seven or eight possessions at a time and not score. It can get frustrating.”

Burbank competed recently in the “49th Annual Dick Sporting Good Holiday Classic” and went 1-3 with the three losses by four points or less. They reached the championship game of the “Pride of the Foothills Tournament” held at Glendora High.

The Bulldogs went 3-1 in the tournament with their only loss coming to Damien, a very good team from the CIF Southern Section. Seniors Richard Elmoyan and Anthony Kardosh were named All-Tournament.

Elmoyan continues to play inspired basketball on both ends of the court. Elmoyan, a second-team all-league selection in 2013, is averaging 12.8 ppg, five assists per game and three steals per game. He personifies the all-around player a coach dreams for.

Kardosh, a 6-foot-4 center, averages 11.7 ppg and brings a defensive presence for the Bulldogs. Senior Adam Pasco contributes 9.8 ppg while fellow senior Danny Terrones has been a reliable sixth man off the bench.

Without doubt, Burbank is knocking on the door of becoming a very strong team. Attention to detail on its half-court offense, better focus on the foul line and restoring confidence as a team will be areas that DeLaurie will address as the Bulldogs begin their second season.

“Shooting is contagious and about being confident,” DeLaurie said. “If we can take care of that, then we will be fine.”

If Burbank can knock down the door by becoming a more proficient offensive team to go along with its tough-nosed defense, they will be right in the thick of the Pacific League race come February.