It came in waves, was relentless and pushed the visiting Burbank High boys’ basketball team to a surprising 57-32 Pacific League triumph over Burroughs before a full house on Thursday night.

From the opening tipoff it became clear that a tough-minded defensive stance was being established by the Bulldogs who forced the Indians into shooting 18.7 percent from the field (nine of 48). 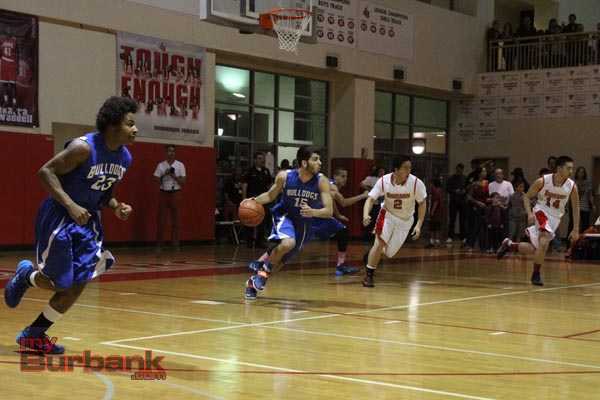 Richard Elmoyan led the way for Burbank (Photo by Ross A. Benson)

Burbank (13-13 and 7-7 in league) limited Burroughs (16-10 and 8-6 in league) to less than double figures in the first and third quarters, while holding the Indians to a combined six of 25 (24 percent) from the floor in those eight-minute stanzas.

“We wanted to show the city of Burbank how to play defense,” Burbank coach Jerry DeLaurie said. “Our motto for this game was to show we’re the No. 1 defensive team in the league.”

The Bulldogs capped league play with three consecutive wins, allowed the fewest points and are hoping for a CIF Southern Section at-large bid.

Burroughs, which opened the first half of league action 6-1, then went 2-5 over the second half, was the highest scoring team.

This game was nothing like the first meeting last month when the Indians routed the Bulldogs, 68-48. 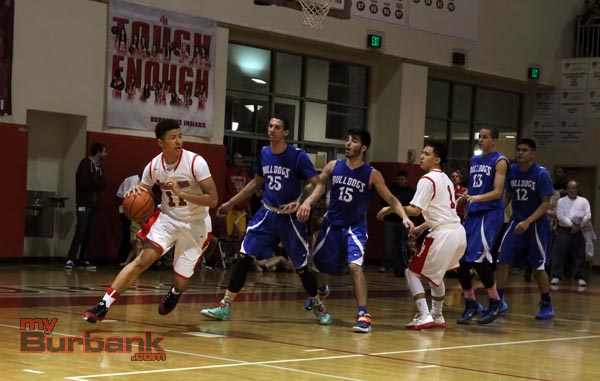 Jakob Davis of Burroughs looks for room on offense (Photo by Ross A. Benson)

Wainright, who came in averaging 25.3 points per contest, managed a game-best 15, while Ewing, who entered with a 16.4 average, tallied four.

“They’re a great team [Burroughs] over there and he’s a great player,” DeLaurie said of Wainright. “It’s hard to stop a player like him.”

Shooting primarily from the perimeter, Burroughs missed all of its 12 shots in the first quarter while Burbank canned nine of 11 and held a 23-2 lead entering the second quarter. 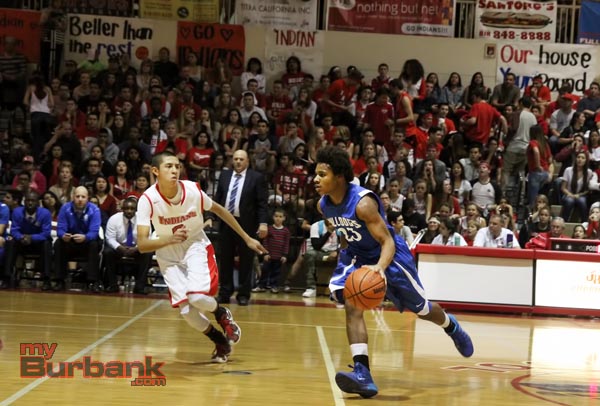 Cody Boseman drives up court for the Bulldogs (Photo by Ross A. Benson)

When senior forward Adam Pasco (10 points) scored after a steal the Bulldogs were ahead 9-0 with 4:26 left.

Senior guard Richard Elmoyan, who finished with a team-best 11 points, scored eight in the first quarter including two from three-point range, and when his trey from 28 feet went in at the buzzer, the Burbank crowd was on its collective feet sensing the upset.

“He’s what we want at Burbank,” DeLaurie said of Elmoyan. “He’s very unselfish and he works hard. He’s left a legacy.”

Elmoyan said the last two games were necessary if the team had any chance of making the playoffs.

“These two games reality kicked in,” he said. “We wanted this game to be the show-stopper. Everybody stepped up and the chemistry kicked in a lot.”

The Indians outscored the Bulldogs 12-11, in the second quarter as sophomore guard Steven Hubbell dropped in his night’s worth (four points), but Burroughs still trailed, 34-14, at the half. 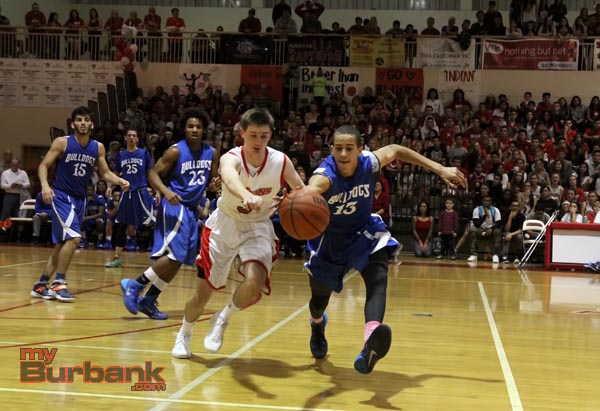 Mike Woods of Burbank and Burroughs’ David Schwer battle for the loose ball (Photo by Ross A. Benson)

Senior power forward Anthony Kardosh scored four points in the third quarter as the Bulldogs entered the fourth quarter ahead, 46-21.

“I know that we wanted to get the ball inside,” said Kardosh, who had nine points. “That’s when we’re good. I think tonight we proved everyone wrong.”

Another key to Burbank’s victory was crisp ball movement which resulted in high-percentage shots, especially in the opening half.

“Burbank was fantastic,” Burroughs coach Adam Hochberg said. “We got taught a lesson tonight. Every facet they were better than us. We played like a team thinking we were already in [the playoffs], which we are, but if we play the same way in eight days, we’re going to lose.”

CIF playoff selections and matchups will be announced Sunday afternoon.

Williams Leads Burbank to a Resounding 50-12 Win Against Inglewood
Tri-School Basketball Tournament A Success On & Off the Court
Big Expectations for Burbank, Burroughs Track Teams
Stengel Remembered in New Book