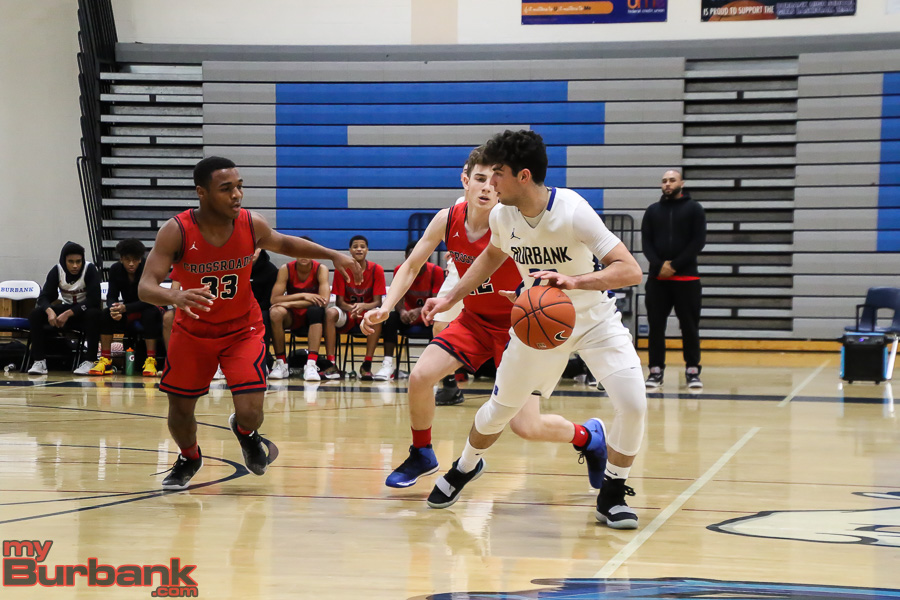 After 16 minutes, it seemed that the Burbank High boys’ basketball team had matters in hand.

Its long-range jumpers were falling, its man-to-man defense was effective and its passing was crisp, which resulted in the Bulldogs holding a 15-point advantage at halftime over Crossroads in one of seven games held at the Burbank gym for the Dr. Martin Luther King Jr. Day Showdown.

What occurred in the second half was the opposite as the Bulldogs struggled offensively, the defense opened up gapping holes for easy hoops including a bevy of slams and too many turnovers as the Roadrunners collected a 73-64 win on Monday afternoon.

The Bulldogs were successful on six of 23 field goals in the second half (26 percent) and were outscored by 24 points, including 19-6 in the third period.

“We play man-to-man,” Burbank coach Ernest Baskerville said of trying to defend Crossroads’ 6-10 freshman center Henri Adiassa. “We tried to front him. He’s a good player and he can play. When you have a height advantage, you have to take advantage of that.”

Baskerville continued: “I thought their point guard [Yukki Okubo] did a good job of being more active,” he noted.

Burbank senior point guard Miles D’Agostin, who had an off-night in an 18-point loss against visiting Crescenta Valley on Friday, found his stroke versus Crossroads, which produced point guard Baron Davis, who played two seasons at UCLA and 13 in the NBA where he averaged 16.1 points and 7.2 assists.

At the break, D’Agostin had 16 points after tallying 13 points in the opening quarter.

D’Agostin was held scoreless in the third quarter, but rebounded for 11 points in the fourth frame that included two treys including one with 1:03 left that cut the Roadrunners’ lead to 69-63.

Junior point guard Leo Tahmasian contributed nine points for the Bulldogs (21 of 57 for 36.8 percent) and canned two of Burbank’s 11 three-pointers.

The Roadrunners (12-10), who snapped a four-game losing streak, came out slowly in the initial period, making three of 15.

Junior swingman Miles Ceballos, whose father Cedric Ceballos, a small forward who toiled 11 seasons in the NBA, including three with the Lakers, poured in nine of his 16 points in the second half.

The third quarter saw Adiassa, who had a game-high 27 rebounds, finally break out with six points.

But what followed for Adiassa was a 14-point explosion in the fourth quarter as junior point guard Okubo (16 points) repeatedly found him at the low box and simply lofted easy passes for three vicious and spinetingling slam dunks.

“Yeah, I just went in at halftime and started yelling,” Crossroads coach Anthony Davis said of trying to inspire his youthful, but talented team. “I try to keep my cool because we have a young team and you don’t want to lose them. I tried to pull out something to fire them up by any means to do that.”

Davis continued: “We were more focused. We let them [Burbank] play comfortable. In the second half we tried to control the tempo,” he pointed out. “I have to be patient and not ride them for every mistake. They’re finding their way.”

Davis went on: “We have to play inside out with him,” he said of Adiassa, who is still learning the game. “I told him that when he’s in a rush, we’re in a rush.”

Okubo’s scoring output, like the game itself, came slowly at first as he tallied two points in the opening frame and four in the second.

Like Adiassa, Okubo took off in the second half as the 5-7 floor leader had four points in the third frame and six in the final period.

O’Neal’s bucket with 7:20 left on the clock in the fourth quarter handed the Roadrunners a 51-49 edge.