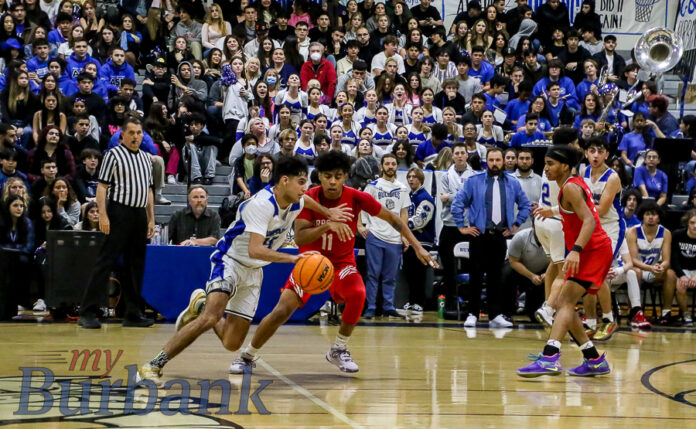 The Burbank High boys’ basketball team has had its ups and downs this season, having already gone through a midseason coaching change.
Friday night, the Bulldogs started out very cold. But they put the jets on in the second quarter and never looked back, earning an 81-64 home victory over Burroughs.
Burbank trailed 25-9 at the end of the first quarter and looked very cold. But they started off the second quarter with an 8-0 run and eventually overtook Burroughs at 31-30 following a basket by Sattwik Banerjee.

“We came into this game prepared. We didn’t execute in the first quarter. We refused to stay down. We made sure to keep our energy high and believe that we could win. Ultimately, we started hitting shots and started making stops, and we just kept rolling.”  said Banerjee, who had a game-high 33 points.

Junior Omar Payind, who had 32 points for Burbank, said staying focused was the key.

“Even though shots weren’t falling in the first quarter and into the second quarter, we went into halftime and had a talk and came back in the game,” Payind said.
Burbank (7-12 overall, 3-5 in league) led 32-31 at halftime.
Burroughs (8-12, 2-6) suffered a loss late in the second quarter when Jagger Topp was given a second technical foul for making a gesture at the Burbank crowd after hitting a 3-pointer. Topp had already scored 10 points.
Payind took over in the third quarter as he hit four 3-pointers, and the Bulldogs went up 57-45 going into the fourth quarter.

“We’re just not doing a good job on defense in the league right now. We’re not getting the necessary stops so that we can play at the pace that we want,” Burroughs coach Alan Ellis said. “We have to get stops and rebound the basketball better than what we are doing.”
Interim Burbank coach Michael Lance, who is a teacher at the school, gave credit to his players.

“Burroughs can shoot the ball, and we knew that. We just had to stay consistent on defense and weather the storm and trust our offense,” Lance said.

Chase Kardosh led Burroughs with 23 points. Sam Horning had 12 points,  Tyrell Burrell had 10 and Thomas Mahoney had three. Landon Everhart and Elder Jackson each had two.

Also, for Burbank, Ash Danielian and Kevin Dehbashian each had five points, Steven Harutyunian had four, and Evan Baker had two points.