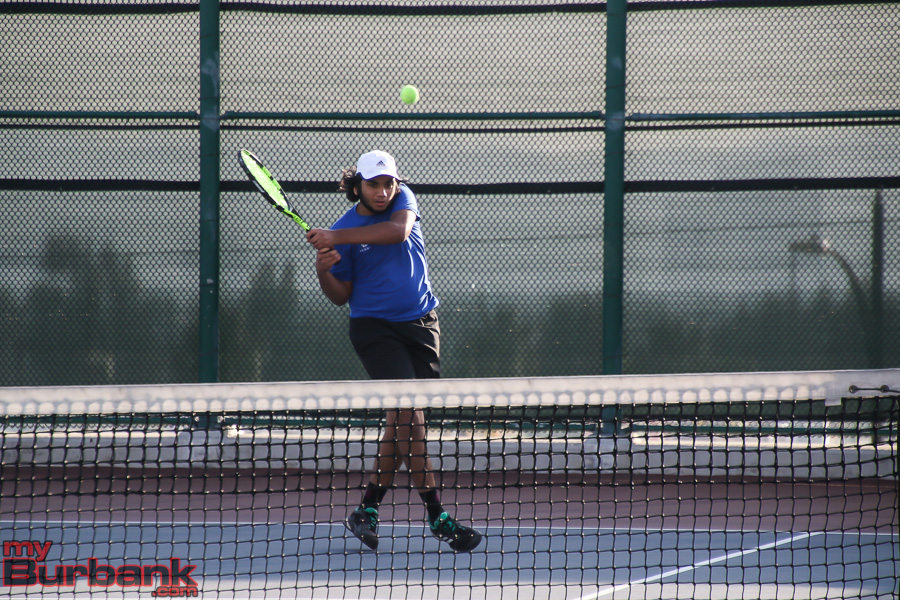 A sturdy and dominant display by the Burbank High boys’ doubles squad saw them sweep visiting Hoover which helped catapult the Bulldogs to a 14-4 victory in a Pacific League match on Tuesday afternoon.

The Bulldogs now have two matches under their belt, both victories, including a 10-8 triumph over Glendale.

The Tornadoes haven’t been as fortunate, losing three, as Burroughs won 13-5 and Crescenta Valley was also victorious, 15-3.

Denduluri, who when on his game, is a tough nut to crack, seemed strangely off from the outset.

At several junctures, Denduluri made unforced hitting errors and offered a less than accurate first serve, which forced a weaker second serve.

“For the one’s I played, I just was overthinking it,” Denduluri said of the two setbacks. “With my skill set, I should have been able to beat both of them.”

Denduluri went on: “I’m a little bit under the weather right now, I have a sore throat, but that’s not the full reason. I went out to bad starts in both games. That got into my head. Once you get off to a bad start, you feel the pressure, so you say to yourself, I got off to a bad start, so I have to really pick it up. That got to me. I was overthinking every ground stroke, every serve,” he noted.

Denduluri said his service and forehand are his bread and butter.

“Usually I have a great serve. I can rely on my first serve. But I got almost none in,” he pointed out. “My serve is much better. I was so petrified of double faulting.”

Denduluri’s 6-0 victory came when sophomore Vahe Haleblian forfeited due to an injured ankle.

Desai defeated Haleblian 6-3 and Ghadimi 6-2, but Markosian prevailed 6-2. Kerimyan staved off Markosian 6-3, and Haleblian 5-2 (retired with the ankle injury) while Ghadimi won 6-4.