There is nothing like defeating the defending league champion and ending a couple of streaks in the process. Just ask the Burbank High track and field team what a great feeling that is.

Burbank traveled to Arcadia High on Thursday hoping to put an end to years of futility. The Bulldogs had never beaten the Apaches, in any level, since joining the Pacific League in the 2006 – 2007 season. 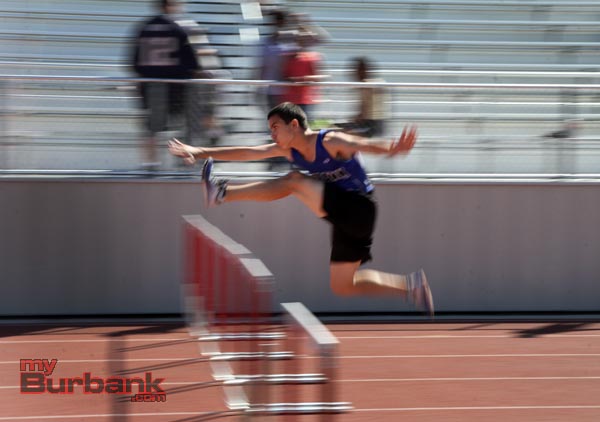 Burbank hurdled over Arcadia into first place (Photo by Ross A. Benson)

Arcadia had also not lost a league dual meet, at any level, in five years. Not one. Well, it’s time to celebrate, at least for this weekend, after the Burbank boys were able to defeat Arcadia in both the boys varsity and frosh-soph divisions.

Here are the numbers that shook up the Pacific League on the boys varsity level:

“This was a huge win for our program,” Burbank coach Darin Wolf said.  “Last year we beat CV for the first time since joining this league and this year we knock off the 5-time reigning champions Arcadia. It was just an overall outstanding effort and I am just so proud of this team.”

Both BHS teams are now 4-0 in league and 5-0 overall while Arcadia drops to second place, an area very unfamiliar to them.

As for the Bulldogs, it’s a nice view from above as they sit atop the league standings in their drive for a league championship.