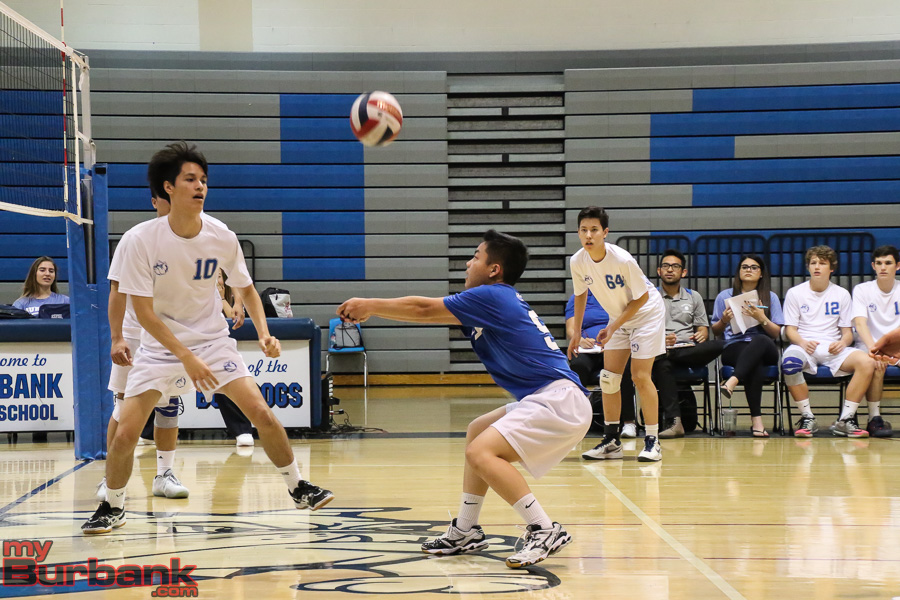 The opportunities were certainly available for the Burbank High boys’ volleyball team Friday night when the Bulldogs visited Crescenta Valley High.
The Bulldogs held leads well into each of the first three games. But the Falcons met most of those challenges and went on to win 25-20, 25-22, 24-26, 25-14 over the Bulldogs in a Pacific League match.
“I think we came out with good momentum. I think we came out fired up and ready to play, but sometimes we get into our own heads and let that affect the way we play,” Burbank coach Gaby Gallardo said. “CV is a good team and we have to be able to finish. We had the same problem with Burroughs, being ahead and we let the mistakes affect us mentally and we end up losing the match.”

Burbank (16-10, 4-3 in league) led 10-5 at one point early in the first game and was tied at 18 with CV before Ben Allen took over for the Falcons.
Allen had three of his team-high 15 kills late in the first game.
Burbank was up 14-12 in the second game, before the Falcons closed with a 13-8 run.
The Bulldogs fought back in the third game, led by Adrian Rivera. Rivera, who had a match-high 19 kills, kept his team in the match by recording seven of those kills.
A kill by Rivera made it 24-22. After CV came back to tie the score at 24, Burbank got a key kill from Jonathan Ragheb to make it 25-24. The Bulldogs were able to close out the game thanks to a CV error.
CV (17-3-2, 6-1 in league) was not shaken by Burbank’s ability to avoid a sweep.
The Falcons jumped out to an early 6-1 advantage in the fourth game and were never threatened.
Ragheb finished with nine kills and Rory Rickey had eight along with a pair of blocks. Freshman Vincent Vang served three aces. Setter Jonthan Tapan had 42 assists.