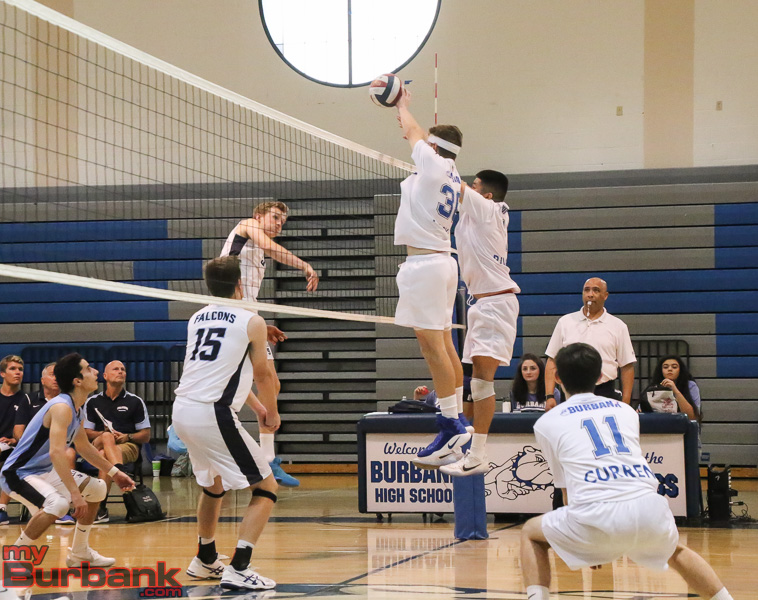 When the Burbank High boys’ volleyball team took the floor to face Crescenta Valley in a Pacific League encounter on Wednesday, the squad had to feel extremely confident.

This notion was well-founded as the Bulldogs forced a fifth and deciding set after falling behind two sets to one.

The star was senior middle hitter Anders Johnson, who finished with 15 kills along with six blocks for the Falcons (14-2-2 and 2-0 in league).

Meanwhile, senior opposite hitter Adrian Rivera had a tremendous outing, but even with his talent, the Bulldogs (13-8 and 1-1 in league) came up just short.

“I really think that we were ready to play and

even though we lost, we’re going to get them the next time,” Rivera said. “We expected to come out on top.”

Rivera added: “We were getting in their heads. We’re going to work harder.”

The fifth set began with the Bulldogs forging ahead 2-0 on a kill from junior middle blocker Rory Rickey.

It was even at 3-3 on a winner from Falcon senior outside hitter Ben Allen (eight kills).

Slowly Crescenta Valley moved ahead 10-6 on a block from Johnson, but the Bulldogs came within 12-10 on Rickey’s winner only to see the Falcons score three of the final four points, including the clincher from senior middle hitter Brett Dunkin (seven kills).

“This was a pretty darn close match,” Crescenta Valley coach John Nelson said. “It came down to four points.”

Nelson continued: “We showed character and mental toughness. It’s hard to rattle them. We knew what was coming. We had some inconsistency, but we’re getting better. I told them, we can do this, we’re good,” he said.

The Falcons even it at 8-8 on Johnson’s smash, but a 7-3 explosion by the Bulldogs saw them dash ahead 15-11 on junior libero Edward Curren’s tapper.

The crowd was on its feet and the noise level rose significantly after Burbank freshman defensive specialist Vincent Vang’s block gave the hosts a 20-13 advantage.

The set was made official after an emphatic winner from Rivera that even the match at two sets apiece.

The third set was controlled by the Bulldogs in the early stages as they took a 6-3 edge on sophomore middle blocker Luca Bily’s stuff.

Crescenta Valley rallied and even it at 11-11 when Rickey’s attempt found the net and it became 13-13 on Allen’s rocket.

The Falcons took control 19-17 on junior outside hitter Matthew Gardner’s kill and closed it out with a 6-3 spurt that was capped off on Allen’s kill.

Burbank led 4-0 in the second set on a tapper from Rivera, but the Falcons went on an 8-4 run and evened it at 8-8 on Johnson’s kill.

Another Falcon run followed, this time 8-1 as Crescenta Valley led 16-9 on Kim’s winner.

Crescenta Valley leveled it at a set apiece after a 9-4 burst that was finalized on Johnson’s stuff.

Burbank was sharp in the initial set and skirted ahead 8-3 on a winner from junior middle blocker Jonathan Valmonte.

The Bulldogs moved in front 21-17 on senior setter Jonathan Tapan’s dagger and then closed out the set on Rivera’s winner.