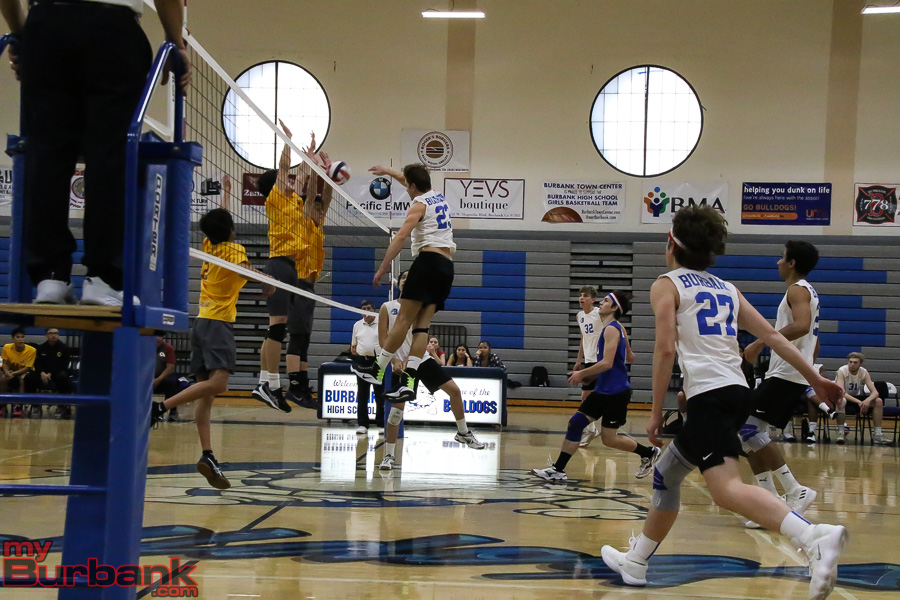 Short and sweet was the Burbank High boys’ volleyball triumph over visiting Arcadia in a Pacific League match on Thursday.

In two previous nonleague setbacks to Hart and El Camino Real, the Bulldogs were extended to five games.

Not this time as the Bulldogs prevailed 25-22, 25-22, 25-23 and the tone was established early in the first set when the Bulldogs led 5-2 on a kill from junior outside hitter/opposite hitter Ryan Rickey, who finished with 10 winners.

“Today was a lot better. I feel like we were mentally tougher then we were the first two matches that we played,” Burbank coach Karl Rojo said. “We stayed mentally tough. I thought their effort was sound on defense. The effort was there on defense.”

“I was happy with the effort, but there’s always room for improvement,” Rojo said. “The next time we go to Arcadia, it’s going to be tougher.”

This was the ninth consecutive match that the Bulldogs have taken from the Apaches.

“We got a little lackadaisical,” Rojo added. “You can’t take your foot off the pedal.”

Burbank then eased ahead 21-19 on a kill from senior outside hitter Jonathan Ragheb (match-high 35 kills) and closed the set on Rickey’s spike.

“We have a lot of older players and I think we’re all realizing now that we’ve had talent on the team for years, but something we’ve lacked is that grit,” Ragheb said. “We’re all maturing as players and we realize it’s going to take more than two sets.”

Ragheb then spoke about the importance of league wins including one over perennial power Arcadia.

“Every single league game we’re going to come out with the same mentality,” he noted. “It doesn’t matter who we’re playing.”

Ragheb then addressed being a senior. “About leadership, I don’t want to take too much credit,” he said. “Obviously I’m a senior and I’ve been here longer, but everybody has something to contribute.”

The second set proceeded smoothly as the Bulldogs marched in front 4-0 on a winner from Ragheb.

Arcadia drew within 6-5 when Ragheb’s rocket sailed out of bounds. It was tied at 10-10 on a kill from Arcadia’s William Wang.

Senior middle blocker/opposite hitter Rory Rickey’s smash leveled it at 12-12, but the Apaches came alive and pulled ahead 16-13 on a spike from William Cheung.

From this juncture the Bulldogs took control and led 20-17 on Ragheb’s dagger. Burbank then led 23-19 on a bullet from junior middle blocker/opposite hitter Luca Bily and came within one point of the set on Rory Rickey’s kill that made it 24-20.

The Apaches drew within 24-22 on Wesley Kam’s service ace, but the Bulldogs took a two games to none advantage when Kam’s serve found the net.

The match-clinching game was tied at 2-2 when a serve from Burbank senior libero Eddie Curren (20 digs) drifted out of bounds.

Arcadia darted ahead 6-3 on a kill from Cheung, but it was even at 6-6 on Rory Rickey’s block.

It was deadlocked at 10-10 on Bily’s stuff, however, the Apaches gained control at 13-11 when Ryan Rickey’s smash went astray.

Burbank then outscored Arcadia 4-1 and powered ahead 15-14 on Ragheb’s winner.

A kill from Arcadia’s Savvas Andreou tied it at 15-15, only to see the Bulldogs pull ahead 19-16 on Ragheb’s rocket.

The Apaches scored three consecutive points that evened it at 19-19, but the Bulldogs waltzed ahead 23-19 on an ace from Rory Rickey (four kills).

The set and match was concluded on a winner from Bily (eight kills) as the team rejoiced in its initial victory of the season.