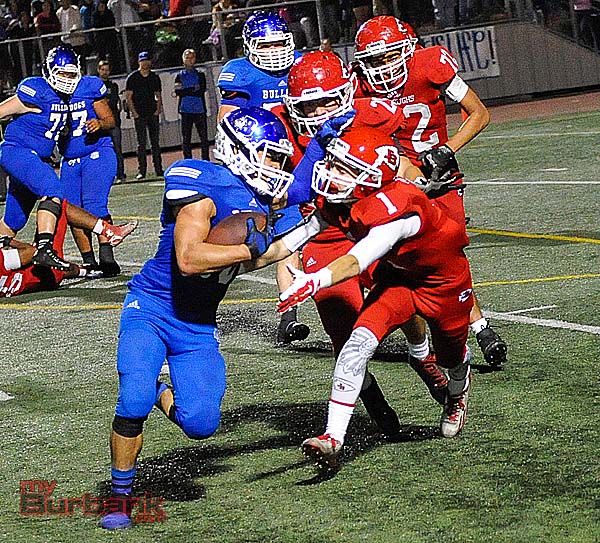 First, congratulations to Crescenta Valley who ran the table with 14 straight wins that culminated in a CIF Championship. The Falcons brought credibility to the Pacific League with their unbeaten season and incredible run to the title that every coach and player covets.

With that being said, the Pacific League released its All-League football selections and a host of Burbank and Burroughs players were recognized. A list of every recipient is below. Congrats to all the players!

A local pair of talented running backs made first team. Burbank senior Tony Toledo rushed for 764 yards and 10 touchdowns on the season to lead the Bulldogs to an 8-4 overall record and a quarterfinal appearance in the CIF Playoffs.

Chance Bell of Burroughs, a sophomore transfer from Las Vegas, made his presence known gaining 1,124 yards on 150 carries (7.5 yards per carry) and nine touchdowns as the Indians went 6-4 overall.

Toledo and Bell found success this year due in large part because of their offensive linemen. Senior Max Montoya of Burbank and the Burroughs senior duo of Andrew Mills and Anthony Olea made first-team.

Burbank’s Kyle Alvarez and Burroughs’ Evan Gurley were two of the most dominant defensive linemen in the league.

Alvarez, a senior, was the heart and soul of the Bulldogs’ defense. He recorded 83 tackles (21 of which were tackles for loss) and a league-high seven sacks to go along with four pass deflections and four fumble recoveries. Gurley, a junior, led the Indians with 89 tackles and four sacks.

Senior Chris Wong of Burbank had a team-high 96 tackles including 14 tackles for loss and Burroughs senior Justin Boyle (75 tackles) made first-team as linebackers.

Burbank senior Nick Cantong (37 tackles, three interceptions and seven pass break-ups) and Burroughs junior Hunter Guerin (62 tackles, 45 solo and four pass break-ups) were prominent players in the secondary. Both were big contributors on the offensive side as well.

First team, second team and honorable mention selections for Burbank and Burroughs are in bold below-