If competing in a tough Pacific League wasn’t enough, the Burbank and Burroughs high girls’ golf teams also had to face a challenging course Wednesday afternoon.

Competing in the third league match of the season, the teams competed at La Canada Country Club.

Like the first two league encounters, Burroughs finished in third in the standings and Burbank finished sixth.

Elizabeth Wang of San Marino was the low medalist shooting 35 on the Par-34 course. 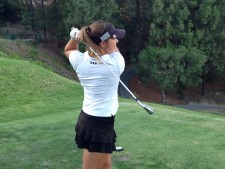 “This course was definitely a little more challenging than others, especially for walking,” Burroughs Ashley Phelps said. “The greens were tough for everybody. Overall I wasn’t super happy with my round but I can’t complain because there’s a couple of things that happened that you can’t control. I’m happy overall with how the team did. We’re still shooting low scores.”

Burbank was led by Amy Tran, who shot 44. 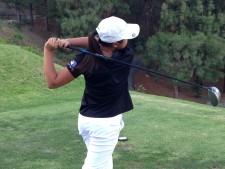 “I think the greens were playing a little slow today, but overall it wasn’t that bad,” Tran said. “I just wasn’t able to hit the shots that I wanted to.”