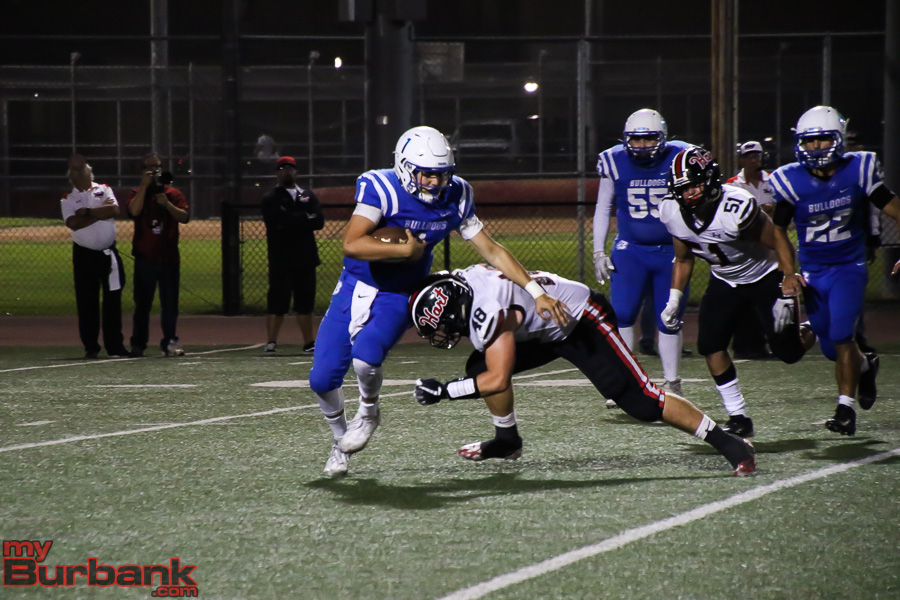 For a second, if you closed your eyes and went back in time you may have thought Friday’s football game between Burbank High and Hart was a battle in the Foothill League.

It wasn’t and when it was over the Bulldogs didn’t have enough gas in the tank and lost to the Indians 49-28 in a nonleague match at Memorial Field.

Each team is gunning for the CIF Southern Section playoffs, but on this warm night the Indians made more big plays than the Bulldogs, who last met Hart in 2005.

Burbank (1-2) started strong and led 14-0 in the first quarter as sophomore wide receiver Brandon Pena raced 95 yards on the initial kickoff to make it 7-0.

Burbank’s lead became 14-0 with 4:38 left as senior quarterback Matthew Porras (10 of 24 for 126 yards with three interceptions) and senior running back Chadz Vang (26 yards on three catches) hooked up on an 11-yard scoring pass that made it 14-0.

On the ensuing kickoff, senior wide receiver Michael Colangelo went 97 yards that sliced the lead in half.

The Indians (2-1) evened it at 14-14 when junior quarterback Zach Johnson, who was playing in only his third varsity game, threw the first of five scoring passes, this time hitting senior wide receiver Jacob Montes (87 yards on six receptions) with a five-yard bullet as 9:12 remained in the second quarter.

From this point, Hart outscored Burbank 35-14 including 14-0 in the fourth period.

The teams then exchanged turnovers which led to Burbank tying the contest at 21-21 when Vang located the end zone on a 15-yard scamper and 1:51 left before the break.

“It was a dog fight and that’s what we expected,” Colman said. “We knew we were going to play a really good team. A really well coached team. It was a test for us to get ready for the playoffs. We have to learn from this so when we’re in the playoffs, we have to be ready for it.”

On Hart’s next series, Johnson capped the drive that began at the Hart 31-yard line with a 34-yard strike to junior wide receiver Drew Munoz and came with 2:24 left that gave the Indians a 35-21 edge.

“They’re a very talented team. They’re very good,” said Hart coach Mike Herrington, who is in his 30th season of the Bulldogs. “We had a hard time containing their quarterback.”

Hart’s lead became 42-28 with eight minutes on the clock in the fourth as Johnson hit Munoz (96 yards on four receptions) with a 23-yard strike and it became 49-28 with 5:32 left when Johnson found Munoz with a 25-yard toss.

Burbank’s next game is a Pacific League encounter against Hoover at home on Friday with a 7 p.m. kickoff.