Burbank ran roughshod all night long against Chatsworth in a dominating 39-3 victory Thursday night. With newly renovated Memorial Field welcoming fans to its beautiful confines, BHS took control from the outset and coasted to the easy win. 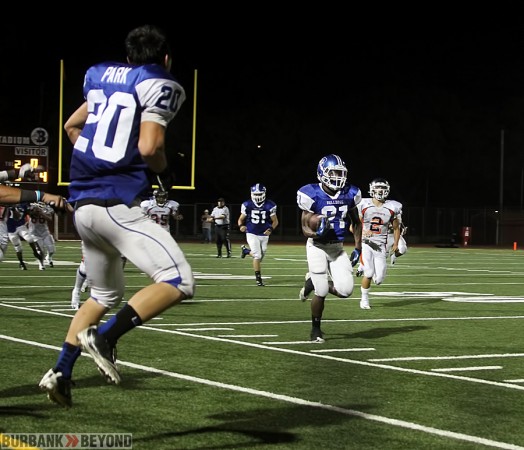 James Williams had a spectacular debut as he rushed for 198 yards on 13 carries and is on his way to the endzone to the delight of Andy Park (#20) (Photo By Ross A. Benson)

Sophomore James Williams had a spectacular debut as he rushed for 198 yards on 13 carries, including touchdown runs of 51 and 89 yards. Senior Teddy Arlington contributed 91 yards of his own and two touchdowns and Joseph Pendleton ran for 62 yards as the Bulldogs amassed 378 yards rushing on the evening.

“I was happy with the way we ran the ball today. I’m glad that we had a good start,” Burbank Coach Hector Valencia said.

Equally impressive was the defense of the Bulldogs. All they did was pitch a shutout until Chatsworth converted on a 42-yard field goal with 1:44 remaining in the game. Senior Steven Kim had four sacks as Burbank only allowed 11 yards rushing total.

“I was very impressed the way our defense played,” Valencia said. “Steven Kim was a force. All the hard work is paying off right now.”

Playing at home for the first time since November 19, 2010, Burbank (1-0) sure its regular season opener was one to remember for its fans. 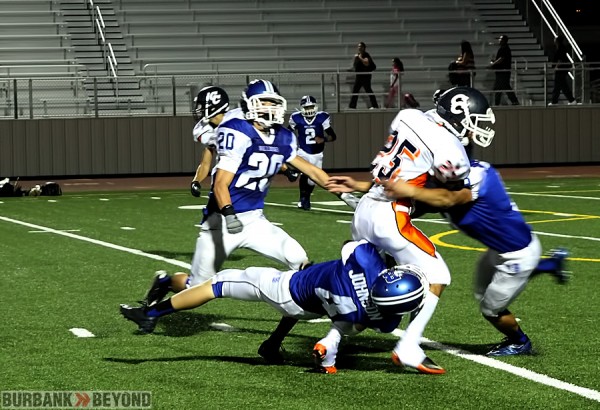 Arlington’s three yard touchdown run capped off a nine-play, 80-yard drive on the first series of the game. After forcing a Chancellor punt, Burbank struck quickly when Williams broke off a scintillating touchdown run of 51 yards as he made the Chatsworth defense look helpless with his mouth-dropping moves.

“We are expecting big things from him,” Valencia said. “It was exciting to actually watch him. He’s one of the hardest workers in the program so we expect some great things from him.”

Suddenly it was 14-0 with 5:12 remaining in the first quarter and Burbank was just starting to get their engines revved. Quarterback Zak Tomlinson completed his only pass of the first half on a nine-yard screen to Damien Lopez who walked into the end zone untouched. The ensuing possession Arlington broke free for a 54 yard touchdown scamper and the lead increased to 27-0 with 8:51 left in the second quarter. 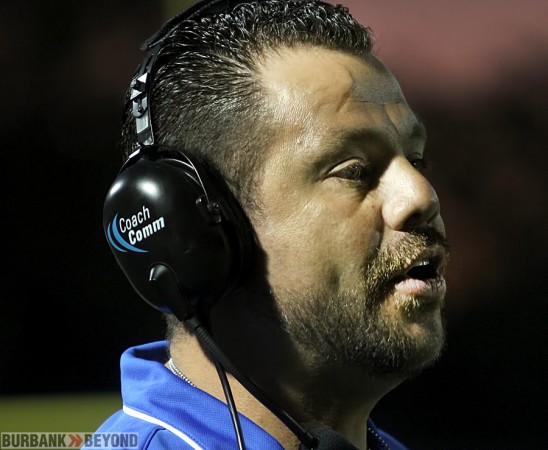 Coach Hector Valencia was happy with what he saw in the season opener against Chatsworth (Photo By Ross A. Benson)

The Bulldogs hammered away at the Chatsworth defense the rest of the first half with a heavy dose of Arlington, Williams and Pendleton. Burbank finished the half with 232 yards on the ground against an overwhelmed Chancellor defense.

“We are not lying about it, we are going to try running the ball this year,” Valencia stated. “There are a couple things we need to tweak that we can fix. Once we do that we will be fine.”

The second half featured more of the same as Burbank capitalized upon Chatsworth miscues. Following a Chancellor fumble, Williams made them suffer again when he took a handoff to the right side, juked a lunging defender, and sprinted up the sideline for an 89-yard touchdown early in the fourth quarter.

“I am excited,” Williams said. “I have to work hard every play. I think I did alright but I can do better.” 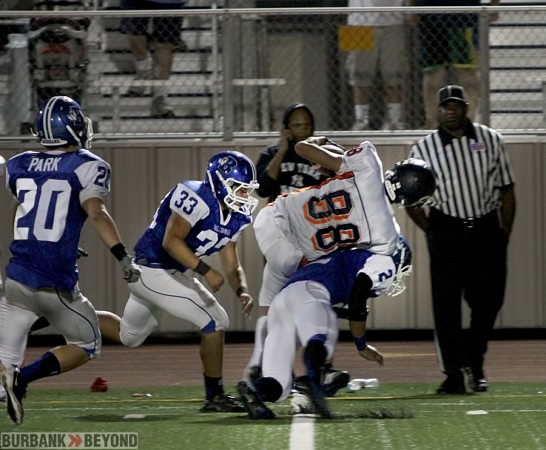 Tomlinson applied the final blow on a 79-yard touchdown pass to Sebastian Santoro that made it 39-0 with 6:20 left in the game. Tomlinson finished two of four passing for 88 yards and two touchdowns.

The Bulldogs return home next Thursday, August 30, with a contest against West Ranch at 7 p.m.