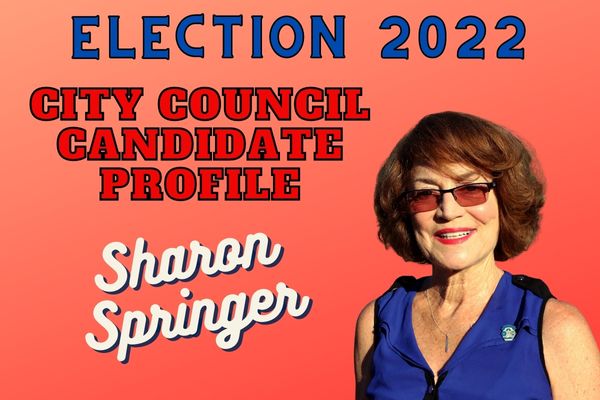 Incumbent Burbank City Councilmember Sharon Springer has been a resident for three decades and has a passion for serving the city. Springer spearheaded a traffic reduction initiative in the mid-’00s which led to her eventual run for the council, where she has been a member since 2017. The former mayor of Burbank explains her enjoyment in experiencing the city’s “sense of community” and discusses one of her hobbies, running marathons, in her myBurbank candidate profile.

How long have you been a Burbank resident? 30 years.

What first brought you to the city?  I came to be with Lee Gardner, my future husband.

What do you enjoy most about Burbank?  The sense of community, my neighbors, and people I love. Sunset Canyon, nearby hiking trails, Christmas tree lighting, Menorah lighting, Easter egg hunt, police and fire day, ribbon cuttings, GiniFest.

Where is your go-to place to have a good time in Burbank?  Starlight Bowl.

I led a traffic calming project on my street in 2005 – 2006. The process took way too long, but it brought my neighbors together. I liked leading them through to a positive outcome and a safer street. That process was the first time it entered my head that one day I might run for office. Lee died in 2010, and I had to create a new life for myself. In 2015, I was at a decision point on how best to move forward. The only reason I could think of not to run for Burbank City Council was fear, and in my life, I’ve tried to never succumb to fear. Also, in a positive way, I wanted to use the strength and toughness that I gained through fighting and advocating for Lee. I lost the City Council race in 2015, and ran again and won in 2017.

What is a fun fact about yourself that you’d like to share? I’ve run 16 marathons, with my best time being 3 hours and 37 minutes at the Columbus Marathon. The Big Sur Marathon was the toughest physical thing I have ever done, and my time was a very decent 3 hours and 45 minutes.