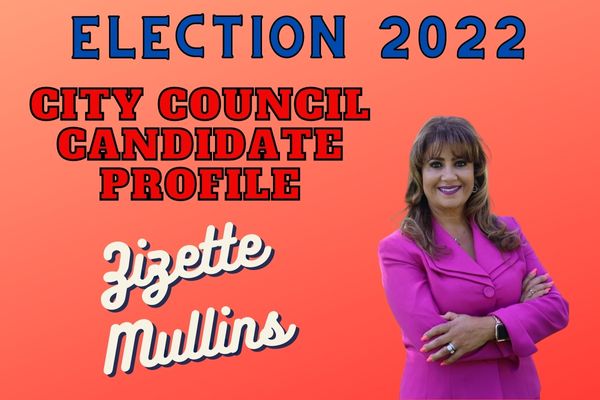 City Clerk Zizette Mullins, a Burbank resident of more than 40 years, shares her history with the city for her Burbank City Council candidate profile. Mullins has held the position of city clerk for a decade, previously owned her own Burbank business, and is a 2013 graduate of Burbank Leadership, a local nonprofit that offers preparation to emerging leaders. As she visited Castaway in her adolescent years, Mullins “fell in love with [her] home,” she says, and she continues to enjoy the “small-town charm” of the area to this day.

I moved to Burbank over 40 years ago. When I was a teenager, my family often went to the Castaway restaurant. I so enjoyed the drive to the restaurant through the beautiful neighborhoods. Even then I recognized the feeling of community and the energy that makes Burbank such an inviting city. I fell in love with my home when I first moved here, and that feeling has grown every year.

There are many things that make Burbank special for me. Our city has retained its small-town charm but also offers everything much larger cities have – excellent public service, fine dining, entertainment, a widely recognized film and television industry and a culturally diverse population, to name just a few. I also feel that Burbank is a very safe community with an excellent school system, making it a great place to raise a family.

Burbank has many great restaurants and venues to enjoy, which makes it difficult to pick just one place. However, my family and I always feel at home at Tequilas restaurant. I love the outdoor atmosphere accompanied by the delicious food.

I was born in Cairo, Egypt, immigrated with my family to the United States in 1977 when I was 13 years old, and attended Hollywood High School. As a student, I enjoyed playing volleyball, acted in local theater and enjoyed summers at the beach listening to the best hits of the 1980s. After graduating high school, I worked for Wells Fargo as a customer service representative before becoming an employee of the City of Glendale Water and Power Department.

Climbing within the department and city, I served in roles in the Finance Department, Economic Development Department, and the Glendale City Manager’s Office. Respected by my peers, I was elected president of the Glendale City Employees Association, where I managed employee grievances and bargained compensation and benefits on behalf of over 1,500 city employees. As a union leader, I believed in maintaining amicable relationships with all I worked with and delivered for the members without creating adversarial relationships with the city’s management team.

While working for the City of Glendale, my sister and I opened Rocky Mountain Chocolate Factory in Burbank, where I had lived since 1982. As a small business owner, I learned how to juggle even more responsibilities, from customer service to payroll. Rocky Mountain Chocolate Factory was a fixture in downtown Burbank for nearly a decade, bringing smiles and sweet treats to all generations of Burbankians.

In June 2012, after the retirement of the Burbank City Clerk, Margarita Campos, I applied and was unanimously appointed by the Burbank City Council to be city clerk and would later win a full term when I was elected by voters in 2013. I was subsequently re-elected to a second term in 2017.

As city clerk, I expanded the mission and work of the City Clerk’s Office. Beyond the maintenance of city records and administration of municipal elections, I partnered with the Burbank Unified School District to launch voter registration initiatives targeted at high school students, increasing the youth voter registration rate in the city. Additionally, I launched the passport services program at the Clerk’s Office, which has led to the generation of over $2.8 million in new revenue for the city’s general fund.

I am a proud mother of two graduates of Burbank schools and a stepmother to one. I am married to Mike, and we live in Magnolia Park with our dog, Zoe. My children are grown, and I am also a proud grandmother to five incredible grandchildren.

I love spending my spare time with my family, especially my five grandchildren. I also love to travel and see the world; my favorite city is Paris. I fell in love with it as soon as I landed.