The entire month of May has been proclaimed as “Walk Bike Month” in Burbank by a recent City Council proclamation.

In making this proclamation, the City officially recognized recent improvements in infrastructure and community access for walking and biking options. This proclamation also helped celebrate and draw additional attention to active transportation choices and their immediate practical benefits to motorists, pedestrians, and bicyclists in Burbank.

Members of the local Walk Bike Burbank chapter of the Los Angeles County Bicycle Coalition were on hand to accept the Proclamation, which was presented at the May 12th City Council meeting – and to present the Mayor of Burbank with a new Mayor’s bicycle, which became the newest official vehicle in the City’s municipal fleet.  Mayor Bob Frutos accepted the bicycle, vowing to use it for many upcoming community events and bike rides.

The Mayor’s new bike, which was designed in Burbank by Pure City Cycles, was purchased as a winning bid at the Burbank Temporary Aid Center’s annual fund-raising auction. It was then donated to Walk Bike Burbank to be held and made available for official City and Mayor-designated uses.

Through this proclamation, the City also recognized an increased number of bicycles sharing local streets. It has become all the more commonplace in Burbank today – along bike lanes and city streets – to see all types and ages of people on their bikes, pedaling places.

A recent walk down Chandler Bike Path on Bike to Work Day, May 14th, revealed a variety of users ranging in age from about eight to 80, equally enjoying and utilizing the public bike/pedestrian pathway. 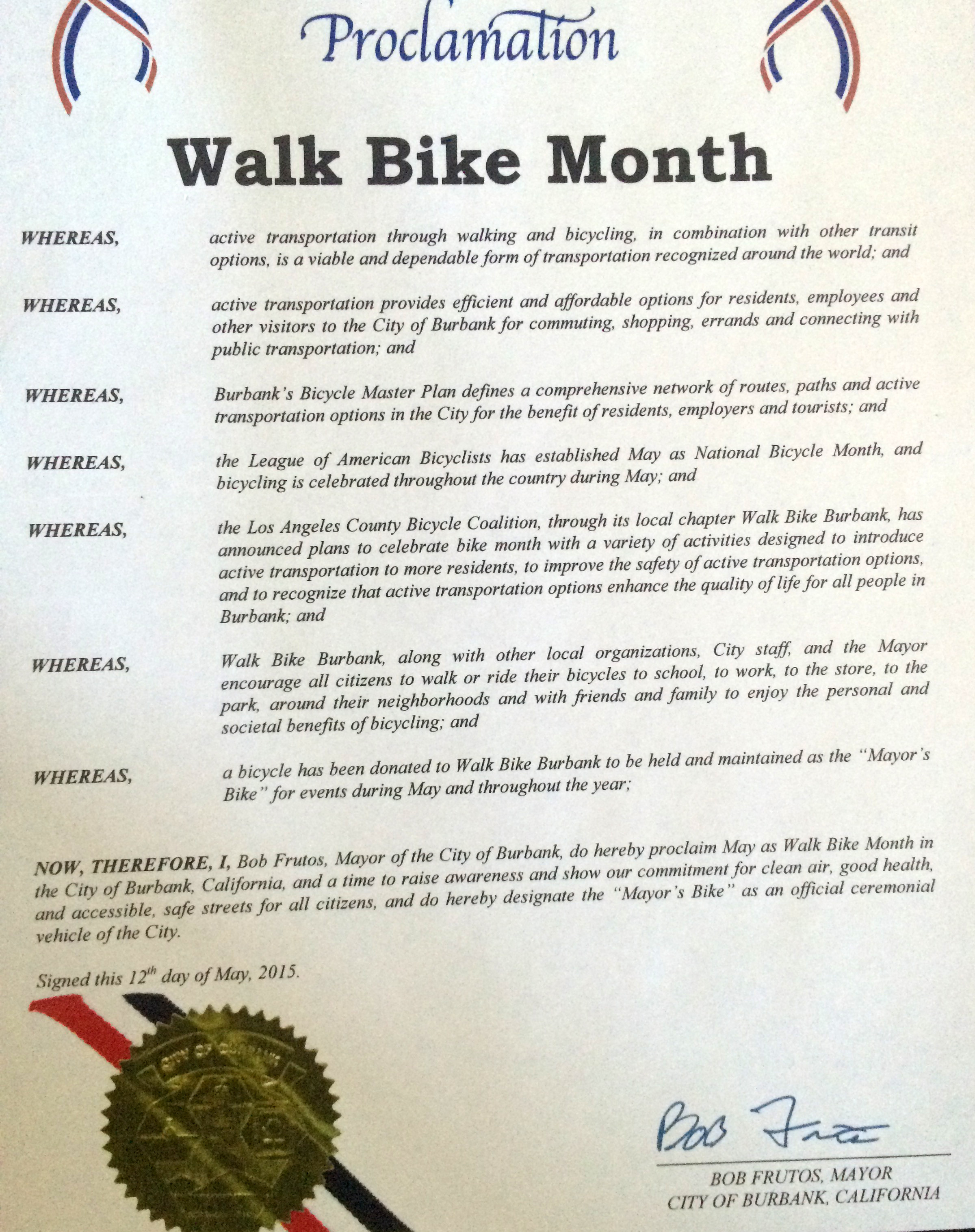 On this National Bike to Work Day, there were plenty of seasoned bike commuters using the path between Downtown Burbank and the Red and Orange Line stations in North Hollywood. But there also appeared many people new to the experience of bicycling as transportation, actively giving bike commuting a go.

Even the City’s former Mayor, Marsha Ramos, was spotted riding her bike to work in Glendale following the Mayor’s Pray Breakfast. She currently is Burbank’s representative on the Metropolitan Water District Board making the most of her own new Pure City bicycle for practical local transportation.

Newcomers and old hands weren’t the only ones pedaling their way to work on Bike to Work Day. Many previous bike riders could be found taking up their old activities, as well.

“The notable increase in bicycles and pedestrians in Burbank is directly connected to increased route safety and connecting bike path options.  Increased safety emphasis at local crosswalks, increased transit choices, and more Burbank Bus service isn’t just a boon for some,” Dickson said. “It increases mobility access for everyone.”